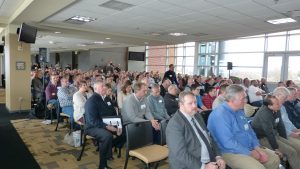 The First Farmers Bank and Trust Agricultural Summit was held yesterday, overlooking Ross Ade Stadium at Purdue University. Senior Vice President and Commercial Production Manager Jeff Rodibaugh spoke with me about what’s becoming an all too familiar theme; the struggles farmers are facing in this economic climate. “Things are definitely tightening up as far as margins, opportunities for making money, the differences between those that are profitable and those that are not. The stakes have gotten higher as far as opportunity to market. There’s been less of a window to obtain the prices they’re really after.”

Rodibaugh says that the conversations have changed with clients from 2012 or 2013. Then there was the significant drought, the ethanol boom, and high commodity prices. Now, not so much. “They were concerned about how fast can they could grow the operation. How can they achieve more acres in order make more money. Now on the flip side, fast forward to 2018, the economy is going gang busters. But the farm economy is struggling. It’s always kind of a cyclical nature. So now we’re looking forward to what’s going to change. How do we grab just a slightly profitable margin instead of going for the home run, or even a double or triple, that we hit back in 2013. It’s a change of mindset that’s happened over time.”

Rodibaugh says the best advice he can give clients is to be consistent and honest. “Be honest with yourself and your family members in your operation. Be honest with your lender. Work with them, bring forward those challenges so you can work together to solve those problems. Seek new opportunities, and seek ways to do it just a little bit different or just a little bit better.”

The Agricultural Summit is an annual event for First Farmers Bank and Trust. Tade Powell, Vice President and Director of Communications and Public Relations, says that the event has traditionally been an invitation only event for clients. However, Powell says, “as we’ve grown we’d like the event to evolve. Probably the best way to get more information about the event is to look on our website, reach out to us, give us an email, or call any one of our offices and we’ll get you on the invite list.”

Powell also announced to HAT that they will be opening a new loan production office in Lafayette in Spring of this year. Powell says, “it certainly is going to widen our ability to serve a client base in Tippecanoe County and the surrounding counties.”