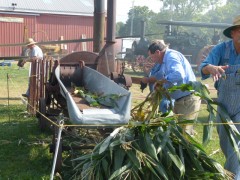 Agricultural innovation from yesterday, today, and tomorrow provided the backdrop for a visit by Indiana Senator Joe Donnelly to the Pioneer Village at the Indiana State Fair.  After spending the morning chopping wood by hand and thrashing wheat with steam power, Senator Donnelly then saw a demonstration of how a farmer uses a drone on his farm and listened to FFA State Officers talk about how prototype robots are being built to scout fields.

The Senator said innovation has always moved fast on the farm, led in most cases by farmers. Thus, he feels the best thing regulators in Washington can do is stay out of the way, “The best education you can get is to be out on the farm and see what things are being done.” He noted that most of the innovation in agriculture in the last century has been done by farmers on their farms, so the future will continue this tradition if farmers have the freedom to operate sustainably. 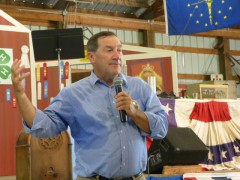 Donnelly stressed that regulators and policy makers need to get better educated about agriculture by getting out of Washington and going to the farm, “My message to these agencies is that they need to work with farmers.”  He cited WOTUS as an example, “Farmers in Indiana are working on several projects that reduce runoff and improve water quality.”

The Senator encouraged farmers and farm groups to reach out to policy makers in Washington, “It is great when the Farm Bureau and others come to talk to us on the Ag Committee about what they are doing on the farm.” Indiana Farm Bureau President Randy Kron, who also attended the event, agreed farmers need to engage more with elected officials and with consumers, “Consumers have questions about what we do on the farm, and some of technology scares them. We need to explain what we are doing and why.” He added that a farm no longer stops at the farm gate, but extends into the marketplace.

Following his morning of hard work, the Senator then joined the Pioneer Village volunteers for an old fashioned, mid-day meal. Launched in August 2014, “Donnelly Days” are an ongoing series of events where the Senator works alongside Hoosiers in a variety of jobs and professions in communities across Indiana to gain a greater understanding of the issues most important to Hoosier workers.