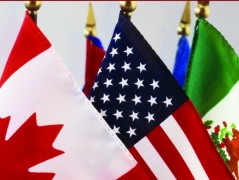 President Trump’s aggressive trade strategy of threatening to pull out of existing agreements without big concessions to the U.S. is being both defended and criticized in farm circles. The President is again taking a hard line with U.S. trading partners in Asia, after first dumping TPP and now threatening to ditch NAFTA.

It’s a strategy that has many, especially in heavily trade-dependent agriculture, and in states won by the president, scratching their heads. But USDA Secretary Sonny Perdue says, “Obviously the President has his own negotiating style, and in writing the Art of the Deal in real estate in New York he was convinced that the other people on the other side of the table had to be persuaded that you were willing to walk away from the deal in order to get the best deal. His heart is for the best deal for America, I’m persuaded of that, and I think in the end we’ll get that. I think there may be some bumpy, anxious moments in between, but I believe the President is absolutely committed to getting the best NAFTA deal for the United States as well as our other trade partners.”

“Lighthizer gets it,” Grassley said. “He agreed that losing NAFTA would have a very negative impact on the farm sector, and his admitting that makes me wonder why there tends to be such an aggressive approach that might harm agriculture from taking everybody to the brink of these talks, and they aren’t to the brink yet, but they’re getting darn close.”

“All parties today were on the same page – NAFTA is important to agriculture and agriculture must remain a top priority in the negotiations. I am hopeful that both Canada and Mexico will come to the next round of negotiations prepared to have substantive conversations. We are eager to conclude these negotiations and to move on to inking new agreements that expand trade opportunities for American agricultural producers,” said Chairman Conaway.

“I’m supportive of efforts to renegotiate NAFTA but we need to make sure the end result will work for agriculture and that we don’t cause any harm to agriculture markets. I’m particularly concerned about the impact Canada’s supply management program, which they were allowed to continue under NAFTA, is having on U.S. dairy and poultry producers. I have expressed my concerns to the administration and urge them to continue working to get these farmers a fair deal. We can’t go backward,” said Ranking Member Peterson.

The roundtable continues the House Agriculture Committee’s efforts to ensure agriculture’s interests are well accounted for in NAFTA renegotiations. This is the second roundtable held this year in addition to a full committee hearing on NAFTA. Last month, Chairman Conaway led a congressional delegation to Ottawa, Canada to meet with Canadian officials to discuss top agriculture priorities.

Leaders present at the roundtable included: