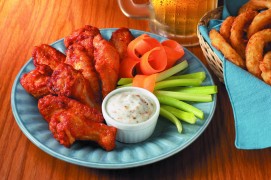 The annual Chicken Wing Report by the National Chicken Council estimates that Americans will consume 1.35 billion wings during Super Bowl weekend, an all-time high. The report released Thursday says the number of wings that will be consumed during next weekend’s Super Bowl between the Philadelphia Eagles and New England Patriots is up 20 million wings, or 1.5 percent from last year. NCC spokesperson Tom Super assured consumers there will be no wing shortage when heading out to the grocery store before the big game. The number of wings consumed, according to NCC is enough to put 625 wings on every seat in all 32 NFL stadiums. The report also finds that 59 percent of U.S. adults who eat chicken wings say they typically like to eat their wings with ranch dressing.

According to the survey, 60 percent of wing eaters prefer traditional, bone-in wings while 40 percent chose boneless.