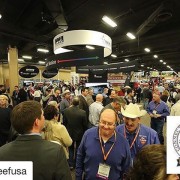 The 120th annual Cattle Industry Convention and National Cattlemen’s Beef Association (NCBA) Trade Show got underway today, with more than 8,000 participants from across America and around the world gathering at Nashville’s iconic Gaylord Opryland Hotel through Saturday.

“The Convention and NCBA Trade Show is the beef industry’s largest gathering of the year, and it’s a great opportunity for everybody in the industry to network, set public policy for 2017, and learn about all the new technology and science that’s improving the quality and safety of American-produced beef every day,” said NCBA President Tracy Brunner. “Of course, we’ll manage to have a little fun in Music City, as well, so if you’re connected to the cattle industry in any way, it’s not too late to mosey on down and join us in Nashville this week.”

Cattlemen’s College, which is considered the premier educational resource for cattle producers, kicked off on Tuesday afternoon with educational sessions focused on genetics, health, and best business practices. The doors to the NCBA Trade Show opened on Wednesday afternoon, with 353 exhibitors showcasing the industry’s latest products and technology.

The Convention’s opening general session on Wednesday afternoon was emceed by country music superstar Josh Turner and keynoted by Dr. Beck Weathers. Dr. Weathers in 1996 barely survived one of the most violent and deadly storms ever to strike Mt. Everest, and he served as the inspiration for the major motion picture Everest.

“You learn a variety of things from an experience like this,” said of his brush with death. “I am an entirely ordinary individual, and we are all cut from the same clay. If I can survive that which is unsurvivable, so can you.”

Other highlights this week include the “Stars and Guitars” reception at the Country Music Hall of Fame, a keynote speech from former White House press secretary Dana Perino on Friday morning, and the “Cowboy’s Night at the Grand Ole Opry,” featuring host Josh Turner and country music stars Trace Atkins, Chris Janson, and the Gatlin Brothers.

The Convention will wrap up on Saturday morning with a meeting of NCBA’s Board of Directors, where official public policy positions will be set for the coming year.

“NCBA is first and foremost a grassroots organization, and we appreciate the thousands of our members who are taking the time to meet in Nashville and set our industry’s direction for another year,” Brunner said.