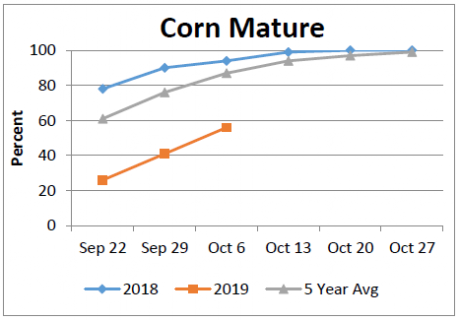 Another hot and dry week pushed crops towards maturity as harvest picked up, according to Greg Matli, State Statistician, USDA NASS, Indiana Field Office. The unusually dry week with only spotty rainfall was ideal for fieldwork but kept soil moisture levels well below both the previous year and the five-year average.

The average temperature for the week was 69.0 degrees Fahrenheit, 10.2 degrees above normal for the State. The amount of rainfall varied from none to 0.87 inches over the week. The statewide average precipitation was 0.34 inches. There were 6.0 days suitable for fieldwork for the week ending October 6. 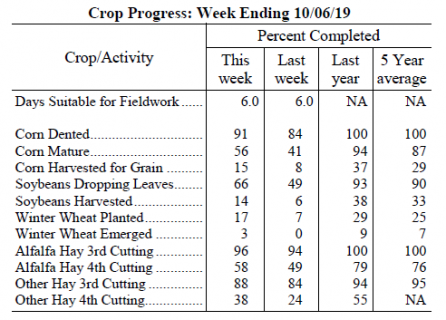 Corn and soybean harvest was underway in earnest last week, particularly on early planted fields, while some of the late planted fields were still working their way towards maturity. Winter wheat planting progressed last week, running slightly behind the five-year average, though some areas in the south reported soils too dry for planting. The dry conditions in the south slowed pasture growth and caused some producers to start feeding hay. Livestock were reported to be healthy and putting on weight. Other activities for the week included planting cover crops, cutting brush, and attending fall fairs.