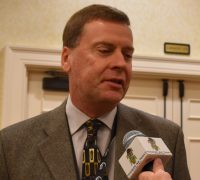 It has been over two and a half decades since an American president addressed the annual meeting of American Farm Bureau. President Trump stopped the streak Monday with his visit to AFBF in Nashville. A former Indiana Farm Bureau president and current vice president both remember that last visit well.

“That was in 1992, President H.W. Bush, and it was in Kansas City at the old Municipal Auditorium,” recalled Kendell Culp from Rensselaer, Indiana Farm Bureau vice president. Past president Don Villwock said security even in 1992 was very strict.

“It’s always quite an honor to get the President but of course there is a lot of inconvenience that goes along with that, and I know that security probably 10-fold since then.”

With NAFTA re-negotiations ongoing and much angst in agriculture over trade deal rhetoric from President Trump, Culp saw the willingness of the President to speak to Farm Bureau as a good sign.

“If he was thinking we don’t need NAFTA, we’re going to pull out of NAFTA, I’m not sure he would come to an audience like this that’s so dependent on trade for agricultural goods,” he said. “So, I look at that as a positive sign.” 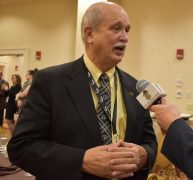 Farmers at the convention sent a strong message about trade to the President, a simple message according to Villwock.

“It would be devastating for agriculture if we would do away with NAFTA, both Mexico and Canada, our two largest trading partners. That’s very key so we want to send that message to him.”

Randy Kron, Indiana Farm Bureau president, added “It was reassuring to hear President Trump recognize the contributions American farmers made to the founding of our country and the contributions they continue to make today. We are pleased that the President will continue to address other issues that concern farmers including the farm bill, the rollback of WOTUS, extending broadband access to rural areas and securing strong trade agreements for our nation’s farmers.”

Trump made his mark on the Farm Bureau convention this year, just as the presidential visit in 1992 did for Culp and his wife. But there was something else that made that convention special for them.

“We were Indiana’s representative in the Indiana Young Farmer Achievement Award that year,” he told HAT. “So, my wife and I went out with our young daughter who was 18 or 19 months old. She was old enough obviously to speak a little bit and she kept saying President Bush, President Bush. That’s where she wanted to go. There were a lot of security measures as you can imagine, but having the President of the United States there and being in the same room with him, it’s just something really special.”