Another Week of Trade Talk, but No Action

Another week has gone by with lots of talk about resolving our trade war with China, but there is no visible progress. U.S. Ag Secretary Sonny Perdue said on national television that the lack of any visible progress on our trade dispute with China has kept the markets depressed and farmers pessimistic. Perdue admitted agriculture is running out of patience, “Farmers understand that China has not been playing fair. They are patriots, but they also know that patriotism does not pay the bills.” He added the trade war comes at a time when the farm economy is in an especially difficult situation. 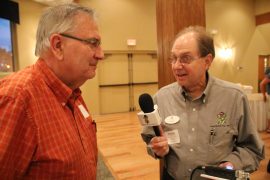 Purdue Ag Economist Dr. Chris Hurt says we are rapidly reaching a critical point in the trade war, “July 6th is the date when we actually start implementing these trade tariffs in a major way.” Hurt remains hopeful a solution will be found, but says there will be uncertainty and volatility in the markets until that happens.

The administration keeps promising it will provide help for farmers who are harmed by the trade dispute. However, Perdue remains vague on exactly what that means, “We have a lot of tools at USDA that we can use, but we are not going to release what those are right now.” He said he meets weekly with the USDA top economist who is calculating the financial impact the trade disruption is having, “It is a very complicated calculation, and we are keeping the administration informed.” He indicated the challenge will be to provide relief for farmers while not disrupting the market or running afoul of WTO rules.

Those tools involve a $30 billion line of credit for the USDA Secretary from the Treasury Department. According to Dale Moore, vice president for public policy at the American Farm Bureau Federation, “USDA is probably unique among the Cabinet offices in effectively having direct access to Treasury through the Commodity Credit Borrowing Authority. The Secretary has a lot of discretion in how he can approach that.”

Meanwhile, Hurt says growers just want to get over the dispute and get on with the business of farming, “U.S. farmers, they just want to produce. They just want to feed the world and produce nutritious food. They don’t want to be involved in these international trade conflicts.”