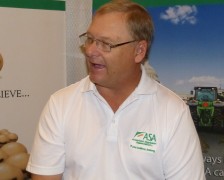 The Trans-Pacific Partnership agreement or TPP is being called the “biggest commercial opportunity ever for U.S. pork producers,” by the National Pork Producers Council, and that organization joined others this week expressing their support for TPP and intention to push hard the next three months for congressional passage.

Wade Cowan, President of the American Soybean Association is one of those supporters, and he’s pleased with what the agreement does for soybean customers in the meat industries.

“The thing that we really were looking for and were hoping we would see and have seen is that our partners who are in animal ag, especially pork producers, poultry, the dairy people, a lot of them got what they needed. I know dairy is still kind of sitting back and reading through the whole agreement, and that’s fine. But our big deal was we need something that lifts all of agriculture I think what we’re seeing is overall the majority of ag got a good deal out of this. I think it’s going to be something that’s very positive for the whole ag economy.”

Cowan told HAT TPP is good for agriculture, but an approved agreement would be bigger than that. It would be good for the American economy.

“There’s some sectors here that have got some problems with the agreement, and I understand that, but the first thing that we’ve got to do in America is make sure that our base productive industries successful. And when you’re looking at that you’re looking at agriculture. You’re looking and oil and gas exploration, mining, those things where we take something where there’s no value and we make something that has value to the community. Those kinds of resources and that kind of lift to the industry, that’s what this economy needs and that will make all of America stronger.”

ASA was joined Wednesday by representatives from the the National Association of Wheat Growers, the National Cattlemen’s Beef Association, the National Corn Growers Association and the U.S. Grains Council to voice their support of the regional trade agreement between the United States, Australia, Brunei Darussalam, Canada, Chile, Japan, Malaysia, Mexico, New Zealand, Peru, Singapore and Vietnam. Those nations account for nearly 40 percent of global GDP.