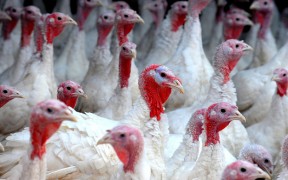 State and Federal Officials confirmed the discovery of Highly Pathogenic Avian Flu at a turkey operation in Dubois County, Indiana on Friday. The infestation was confirmed by the diagnostic lab Thursday evening. Quarantine and depopulation began on Friday, according to Denise Derrer with the Indiana Board of Animal Health, “The infestation was confined to one building on an operation that has 10 barns.” She said that is the only point that is infected and needs to be depopulated.

Secretary of Agriculture Tom Vilsack said federal officials are working with state officials to clean up the situation, “We have dispatched teams to the area and will do our best to limit the infestation.”  Governor Pence said, in a statement, “Indiana is one of the largest poultry states in America, and I have directed all relevant agencies to bring the full resources of the state of Indiana to bear on containing and resolving the issue as quickly as possible.”

ISDA Director Ted McKinney stated that the state has been preparing for this for some time and has policies and procedures in place to minimize its impact on the state poultry industry. Indiana Senator Joe Donnelly said he would help facilitate federal assistance if it becomes necessary, “Our office is in contact with the Indiana State Board of Animal Health, and we will do everything we can to assist state agencies, farmers, and our agriculture professionals as they work to minimize any economic disruption to Hoosier poultry farmers.”

Derrer told HAT that, in addition, teams of investigators have been going door to door in the area over the weekend looking for backyard flocks of birds, “We are offering to test their birds, free of charge, to see if they are infected.”

This virus strain is different from that which devastated the poultry industry last spring. “This finding of highly pathogenic H7N8 is unique to Indiana and the nation,” said Indiana State Veterinarian Bret D. Marsh, DVM. “This strain is unrelated to those identified in the Upper Midwest in 2015, nor is it related to the HPAI case identified in a Northeastern Indiana backyard poultry flock that was affected last May.”  How the turkey operation was infected has not been determined.

According to BOAH, at this point there are no plans for a statewide ban on bird movement, although record keeping is required even for individuals.  Avian influenza does not present a food safety risk; poultry and eggs are safe to eat. The Centers for Disease Control considers the risk of illness to humans to be very low. Indiana’s poultry industry ranks fourth nationally in turkey production, first in duck production, third in eggs, and is a significant producer of broiler chickens. The poultry industry employs more than 14,000 Hoosiers and is valued at $2.5 billion.