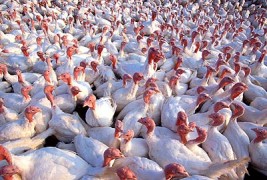 The U.S. Department of Agriculture is creating a stockpile of avian influenza vaccines, but an expert suggests careful consideration of the strategy and cautions that the strain of the next outbreak is unknown. Wild birds are typically the source of the introduction of the virus to backyard and commercial poultry flocks, which makes it very difficult to know the strain and understand the nature of the incoming virus until after the outbreak has occurred in poultry populations, said Suresh Mittal, a professor of comparative pathobiology in Purdue University’s College of Veterinary Medicine.

In 2015, 15 U.S. states had bird flu outbreaks at poultry farms, which led to the loss of more than 48 million birds and $3 billion in revenue, as well as a pricier Thanksgiving dinner. The virus can infect chickens, turkeys, ducks, pheasants, quail, geese and guinea fowl, as well as wild birds, according to the USDA Animal and Plant Health Inspection Service and testimony at a special hearing of the Senate Committee on Agriculture, Nutrition and Forestry.

The U.S. Department of Agriculture issued a second request on Nov. 20 for proposals from manufacturers as it works to create an emergency stockpile of avian influenza vaccines.

Mittal said the USDA should carefully consider its vaccine selections and cautions that the virus can quickly change. While his research focuses on the creation of a vaccine that offers broad protection against multiple strains and mutations of the avian influenza virus, he is not working with a manufacturer or in a position to submit a proposal for the stockpile.

“Protecting poultry from avian influenza is complicated and there is much to consider as the USDA’s Animal and Plant Health Inspection Service makes its decision about vaccine use,” Mittal said. “What works against the viruses infecting birds today may not work against the virus we face tomorrow, as it rapidly mutates to avoid attack from the immune system. Luck – or a vaccine effective against a broad range of strains – is needed for an emergency stockpile to work when an outbreak hits.”

Mittal and postdoctoral student Omar Amen performed a study of a 2010 avian influenza outbreak in vaccinated chickens at a large poultry farm in Egypt, where avian influenza is endemic and a vaccination policy is in place. They found the vaccine offered little protection. A paper detailing the study was published in the September issue of the journal Virus Research and is available online.

At the time of the study a H5N1 virus was responsible for most infections in the country, and the majority of farms used an available vaccine for H5N2 that had experimentally been shown to provide protection against the identified H5N1 virus, Amen said.

“The virus present at the farm we studied had mutated from the strain on which the vaccines were experimentally tested, greatly limiting the ability of the vaccine to protect the birds,” Amen said. “Between 2009 and 2011 there were many outbreaks in vaccinated flocks in Egypt, and this was a rare case where researchers were there at the time to investigate.”

The research team originally intended to monitor the immunizations and measure the resulting increase in antibodies in the chickens’ immune systems, an indicator of how well a vaccine works. While there, Amen noticed that all of the chickens became sick and the study shifted to identify and characterize the virus and find out why the vaccine did not offer protection, he said.

Researchers took 10 samples from different sheds containing thousands of birds within the farm. The team then isolated the virus from the samples and identified its genes. Results showed that all samples contained the same virus, an H5N1 virus with extensive mutations from the endemic H5N1 virus strain used to experimentally test the vaccine.

The H and N nomenclature for avian influenza refers to two proteins on the surface of the virus, the hemagglutinin or “H” and the neuraminidase or “N.” The 16 H subtypes and 9 N subtypes could potentially produce 144 unique influenza viruses. In addition, within a specific H and N subtype, there are subgroups that are antigenically different from each other, Mittal said.

The mutations to the virus that infected the chickens occurred in the hemagglutinin sites, which are the more important sites in terms of a protective antibody response, he said.

“Where changes are in the virus defines how different the virus is,” Mittal said. “A vaccine primes the immune system to recognize and respond to a virus through exposure to certain proteins within that virus. Based on the mutations to this virus, the proteins would be different from those included in the vaccine and the immune system would not be primed and prepared to mount its defense. This case highlights how easily a vaccine thought to be effective can be rendered useless in the face of rapid mutations.”

Mittal has created vaccines for past strains of bird flu and continues to collaborate with the Centers for Disease Control and Prevention. The National Institutes of Health recently awarded $1.55 million to an avian influenza vaccine project Mittal leads.