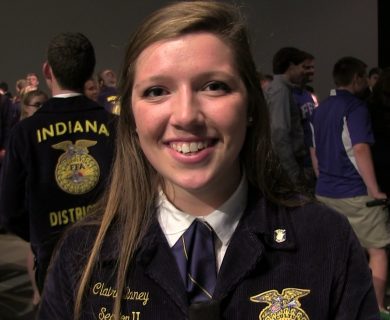 The 2017-2018 Indiana FFA State President has moved on to the College of Agriculture at Purdue University, but she could be jumping back into a blue jacket the first of the year. Claire Baney is making a run at a national FFA officer slot, and she will learn her fate at end of this month as the National FFA Convention & Expo in Indianapolis closes Saturday October 27th.

What motivated Baney to run for national office?

“I would say just the exposure to members motivated me to want to make that push, make that jump, but also too because of my love for agriculture of course,” she told HAT. “That desire to create relationships is of course is another one, and it’s those two that really made me want to be someone who could become a national officer and make that impact on a larger level.”

She has spent a good deal of time preparing for the rigors of making the final cut from the original nearly fifty candidates, even traveling out of state to do so. Baney has also relied on input from the Indiana FFA support system.

“One thing that Indiana FFA is so blessed to have is such an awesome support system from our past state officers and from people who are just supporters of the Indiana FFA, and so I will definitely be going to some of those people. We’ve also had several past Indiana FFA state officers who have served on the nominating committee, and I know they’ll be great resources as well.”

She added, “Ultimately, I don’t think of this as a competition. I just want the six best candidates to serve the National FFA Organization because that’s what our members deserve.”

The Purdue Agricultural Economics and Agricultural Education double major graduated from Hamilton Southeastern High School. She also participated in 4-H and served on the Hamilton County Purdue Extension Board, as well as the Mayor’s Youth Council in Fishers. This summer she interned with Hoosier Ag Today and will be recognized at the National Association of Farm Broadcasting convention in Kansas City in November.

“Claire’s passion for agriculture and willingness to serve others has taken her far in FFA and will continue to take her far in her future endeavors,” said Rob Hays, Indiana FFA Association Director. “She is an excellent student and the association is proud of what she has accomplished. We wish her all the best moving forward.”

To become a National FFA officer, Baney will undergo a week-long selection process and will be evaluated on everything from her written and verbal skills to her ability to facilitate classroom discussions. If selected, she will join the five other officers, traveling the country and promoting FFA to business and industry leaders, FFA members, government and education officials, and the general public.