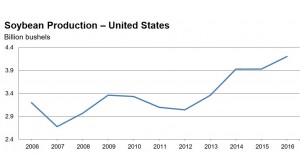 The September crop report from USDA Monday projects record corn and soybean production this year, and the soybean report was enough to drive the market much lower. USDA bumped soybean yield and production beyond all estimates and its own August report. Production is now pegged at 4.201 billion bushels and a yield of 50.6.

The numbers were up enough to surprise analysts like Bill Gentry at Risk Management Commodities in Lafayette.

“I really was surprised to see the actual number come out,” he said. “I listened to Jim (Hedrick) from our office about the agronomics of this crop and he says beans really have the potential to stand in with phenomenal yields. We’re getting early yield checks already that are really sounding good. Early variety beans are really coming in nice, so I think realistically the USDA looked at it and said here you go, we’ll put a real number in play and watch how the market responds to it.”

Soybean 2016-17 ending stocks were also raised. Corn ending stocks were lowered and the report dropped corn production but not as much as the average of trade estimates. Production is estimated to be 15.093 billion bushels with an average yield of 174.4. 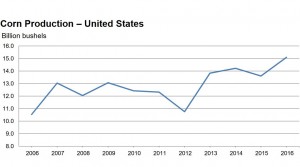 “Not a real crazy number,” Gentry said. “The crazy one was last month now that we’ve seen USDA back off on their yield expectations a little bit. I think the fact that they’re still using record ear weights for this report, and we’ve got some anecdotal data that suggests that may not be the case going forward. So I think they did the right direction for the adjustment.”

Indiana corn yield drops 2 bushels from last month to 185, and almost 1.038 billion bushels to be harvested. Soybean yield for Hoosier farmers is expected to average 58, a jump of 3 bushels per acre and total production is nearing 560 million acres.