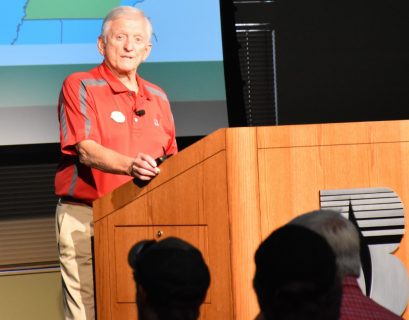 Indiana-based Beck’s Hybrids has weighed in on the future use of dicamba weed killer with a letter to the Environmental Protection Agency. Off-target movement of the new formulation has continued this year, even with an off-season of additional label restrictions and applicator training.

“Forty-eight percent of the farmers said we think it ought to be modified or not renewed,” he said. “That was a little scary, when the farmers think that maybe one of the alternatives is to not have dicamba around anymore. So, our company said we would like to encourage EPA to maybe make some rules that would reduce some of the volatilization, because that’s where the problem is. People are spraying it properly, it’s just that a day or two later it drifts, volatilizes over onto the neighbor.”

So, Beck’s Hybrids wrote to EPA asking that they further regulate how late in the season that dicamba formulations can be sprayed.

“We suggest that could be maybe just spraying pre-plant. You could also say let’s just spray up to a certain leaf stage, or you could say we spray up to a certain date. There you would have to go by state, date by state. We would like for them to look at that kind of a thing so that we show some responsibility here as farmers.”

He told HAT taking a stand on the issue is not an extraordinary move for the company.

“It’s simply what we do. We’re farmers too and we’re about helping farmers succeed, and this is the best way to allow all farmers to have choices on what they plant and also to maintain the viability of dicamba for the future. That’s what it’s really about because we need it. But we need it used along with other chemistries that are here and that are about to be released. You know Enlist, Balance bean chemistry is coming along. So, we need a combination of all of these for our farmers to succeed.”

Beck said there is some residual activity in the dicamba formulations, but a pre-plant only application would not provide season long control, particularly in southern states like Arkansas and Mississippi dealing with serious palmer pigweed populations.

Listen to Sonny Beck in the full HAT interview:Sonny-Beck-on-Dicamba-stance