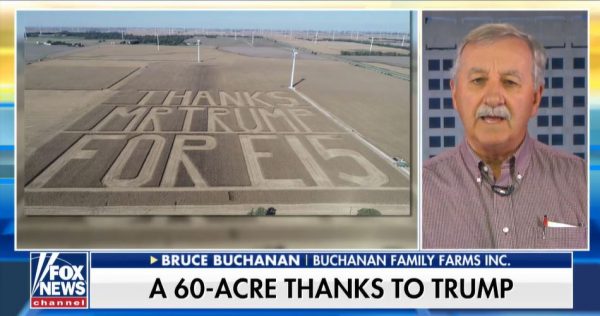 The picture has now gone viral. You’ve probably seen it on social media or even on Fox and Friends Sunday morning. It started out as a conversation in the coffee shop and turned into a maze thanking President Trump for his announcement to allow year-round sales of E15.

Bruce Buchanan farms with his son, Allen, in Benton County, Indiana. When someone suggested the idea, Buchanan said, “Surely, we’re not going to mow down a 220-bushel corn crop. I mean, I’ve been farming long enough to know that I’m not going to do that.”

So, he sought help from someone in the precision planting field to use his combine and harvest the corn. He said he lost a bit of yield by doing it that way, but he still felt it was worth it.

“The problem became when you had the curvature of the lettering, you did lay over a few stalks here and there, but nothing to what you might have expected. And we did harvest four semi loads.”

Why did Buchanan want to do it? He said he’s heard and read that year-round E15 sales could have an impact of an additional 2 billion bushels of corn demand, and he wanted to thank President Trump for his efforts to help farmers.

“Even if it only affects us in 40 percent of what I have been told or read about the usage of corn, certainly it helps us to rid ourselves of the huge carryovers that we’re enduring right now. That’s the problem in our markets is that we are too good at what we do. So, in my mind, a lot of what we have is on us. As much or more so than it is on a tariff situation which we’re only trying to do for the good of the country.

The media and social media attention that the picture has received has been surprising to Buchanan.

Photo Is from Bruce Buchanan of Buchanan Farms in Fowler, Indiana. pic.twitter.com/nc0Wmszm8s

“I just never expected this. And if it helps us in any way focus on what we are out here, doing what we do trying to feed people here as well as the world, then how can it not be a good thing.”

The picture was tweeted out by Ag Secretary Sonny Perdue and then retweeted by Press Secretary Sarah Sanders. You can also find it on our Facebook and Twitter accounts.