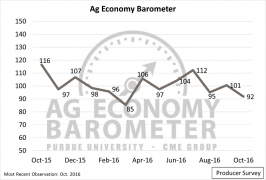 The monthly release of the Purdue and CME Group Ag Economy Barometer shows a significant drop to 92 from 101 in September, the second lowest level of producer optimism since the barometer measurements started a year ago. To a large degree, the sharp drop in the Index of Future Expectations weighed on the overall barometer results, according to Jim Mintert at the Center for Commercial Agriculture.

“I think the decline is probably related to the fact that producers are expecting apparently an extended downturn, especially in crop agriculture. That means a continuation of tight margins for an extended period of time and continues to suggest that we’re in for some challenges going forward. That’s consistent with some of the other information we’ve collected from producers.”

An example of producer pessimism in this new barometer can be seen in their responses to future crop price expectations.

“Twenty-seven percent of the people in our survey said that they expected to see July corn futures sometime between now and next summer dip below $3,” Mintert explained. “Similarly I think 25 percent said they expect soybeans to dip below $8 a bushel, so there’s a group of farmers out there that have a fairly negative perspective about what’s going to take place in the ag sector, and I think that’s showing up in our Index of Future Expectations and also then being reflected in the barometer itself.”

The October report also features the quarterly Ag Thought Leaders Survey of 100 leaders in agribusiness, academics, ag lending and commodity associations. Mintert says that group is a little more optimistic about crop prices, “but they were not particularly optimistic about a big improvement taking place in the farm economy, and so I think from that standpoint they are pretty consistent. But there are some distinctions as the thought leaders thought there was less of a likelihood of seeing prices hit that really low end price scenario, so not as negative a perspective on the price side.”

He also said the thought leaders were a little more optimistic about the prospects for a reduction in production costs.

All of the October report is online and in Purdue’s quarterly webinar Thursday (Nov. 3) at 1:30 p.m. (EDT) Mintert and Michael Langemeier will cover the barometer in depth. Register at https://ag.purdue.edu/commercialag/ageconomybarometer/update/.

The Ag Economy Barometer, Index of Current Conditions and Index of Future Expectations are now being reported on the Bloomberg Terminal under the following ticker symbols: AGECBARO, AGECCURC and AGECFTEX.