According to EIA data analyzed by the Renewable Fuels Association, ethanol production averaged 1.022 million barrels per day (b/d)—or 42.92 million gallons daily. That is a dramatic 31,000 b/d increase from the week before and the largest total in nine weeks. The four-week average for ethanol production stood at 993,000 b/d for an annualized rate of 15.22 billion gallons. Stocks of ethanol stood at 19.7 million barrels. That is a 0.9% decrease from last week.

For the 10th straight week, imports of ethanol registered at zero b/d. Gasoline demand for the week averaged 385.7 million gallons (9.183 million barrels) daily. Refiner/blender input of ethanol averaged 922,000 b/d. It was the third week in a row (and the fourth time in the last six weeks) that the ethanol blend rate in gasoline was higher than 10.0%.

Expressed as a percentage of daily gasoline demand, daily ethanol production was 11.13%. 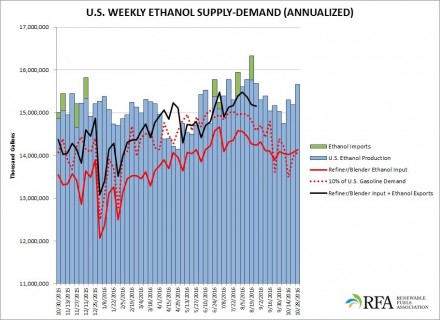