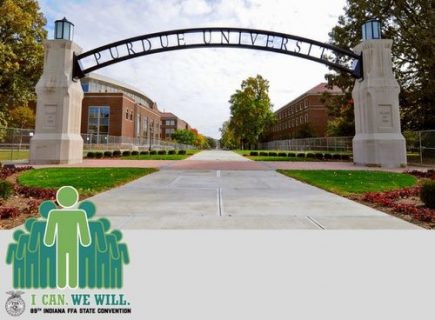 The 89th Indiana FFA State Convention happens in one week, June 18–21 at Purdue University in West Lafayette. Thousands of members from around the state will gather for fun, leadership and award opportunities and events, and service projects. The theme this year is I Can. We Will.

“It just shows that one person can do something, but if they’re able to use their strengths and help other people see their own ‘I Can,’ then together that group of people will be able to accomplish anything that they set their mind to. So, it’s really about the power of not only individual but a team or a group of people.”

An important part of recent conventions are service projects, and Baney says there are a couple they’re doing this year.

“Students will be making tie blankets to donate to those who need them in the Lafayette area,” she told HAT. “We’ll also be having a CANstruction project where students are able to take cans and create different sculptures and pictures out of them, and then all of the cans used in that project will also be donated to people around the Lafayette area. So, we’re definitely passionate about serving our communities and I know that at the local level lots of chapters do many different things to step up the community service in their own area.”

State sentinel Grant Sanchez is most excited about the opening celebration this year.

Based on the description HAT heard, it will be VERY entertaining and memorable. The opening celebration is in Elliott Hall of Music kicking off the first general session Tuesday night, June 18, at 7 PM.

State convention always comes with many emotions for the state officer team as their year of planning the event comes to fruition and they say goodbye to the members and many others they’ve met during the busy, eventful officer year. 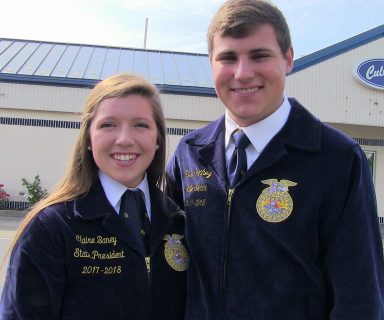 “As much as we want to say we want to go one more year, I think it’s almost that time where we’re kind of slowing down and we’re ready to see the new team come in,” Sanchez said. “It will be really cool to see the next team come in, and every team is different and we’re really excited to see how this next team is unique and what they’ll do for the future of Indiana.”

Baney added the officer year has been more than any of them could have asked for. “I know sometimes we describe it as a whirlwind because things happen so quickly, but it truly has been the most rewarding year of our lives. It has been extremely transformative, and we’ve just been so thankful for all the interaction and experiences we’ve had, but definitely excited to see that new team take it on and make their year also special.”

The introduction of the new officers will close the convention, about the middle of the afternoon on Thursday June 21st, also in Elliott Hall of Music.

Watch for Hoosier Ag Today coverage of the convention, and check out Claire and Grant’s preview video at the HAT YouTube channel.