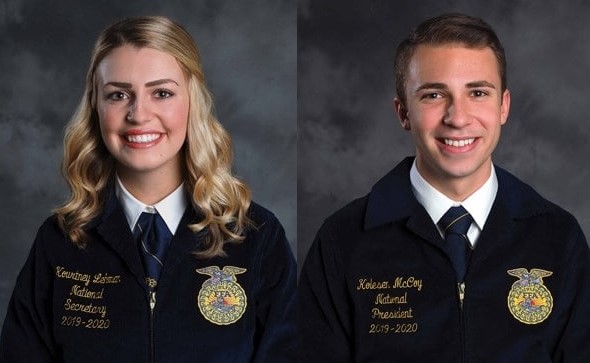 Service projects, community meals and gatherings, and even some tractors on roadways headed for the high school will all be a part of National FFA Week activities, February 22-29. Over 700,000 FFA members in those recognizable blue jackets will be actively sharing the FFA story, including the six national officers who will visit various parts of the country.

Kourtney Lehman, national secretary, will visit South Dakota and Hawaii. In her home chapter in Oregon FFA Week became a spirit week with dress up days and drive your tractor to school day.

“I obviously grew up in a rural community, but FFA members from my school and even students who weren’t involved in FFA would find a tractor and wake up early in the morning and drive it all the way into the school,” she said. “We would close off a part of the parking lot for them to have their tractors for everyone to go look at during lunch. It was really cool to see how the students reacted to it because, even though we’re a small town, for some of those students that was still their first experience seeing equipment like that. And it was on the other hand a really cool experience for those other members to show what their equipment was and what they were able to accomplish with it.”

National FFA President Kolesen McCoy from Ohio said his chapter used the week to inspire students to get more involved and they tried to touch the community with service projects. One in particular put those tractors to good use in a nearby city.

“Numerous students got together, and they got trailers along with their tractors and drove them all around town picking up various scrap metal,” he told HAT. “So, aluminum on one trailer, steel and various metals on another, trash on another trailer, and they would ship them over to their designated locations. It was something everyone joined together and had a wonderful time doing while helping out the community.”

McCoy will visit the U.S. Virgin Islands during the week, and FFA state officers from Indiana and many states will also be on the roads making connections with many local members in their own states.

Whether it is through service projects or community gatherings, National FFA Week is a time for FFA members to raise awareness about the role the National FFA Organization plays in the development of agriculture’s future leaders and the importance of agricultural education.

Other examples of FFA Week activities include the Firebaugh FFA Chapter in California. They will be working with the newly remodeled senior center to encourage education on agriculture that is cross-generational by recording stories about residents and their past roles in agriculture. The Woodstown FFA Chapter in New Jersey will be assembling and distributing birthday boxes to their local women and children’s center for mini birthday celebrations. The kits will include balloons, candles, a cake mix that will only require water to be added, cups, plates, napkins, party hats and a small gift. During National FFA Week, the Carrington FFA Chapter in North Dakota will make tie blankets and pillows that will be donated for the Foster County Social Services. With hunger a prevalent issue in their school district and local community, the Doland FFA Chapter in South Dakota will work with other members of the community and pack 10,000 meals for food pantries in their county and surrounding areas.

National FFA Week is also a time for alumni and supporters to advocate for agricultural education and FFA. On Tuesday, Feb. 25, the National FFA Foundation will celebrate Give FFA Day, a 24-hour campaign encouraging the public to support various needs impacting FFA members. If interested in giving, one can visit FFA.org/giveffaday. On Thursday, FFA Alumni and Supporters will celebrate Alumni Day. Friday, Feb. 28, all FFA members and supporters are encouraged to wear blue and show their FFA pride!