Braun: “I’d Love to be on Ag Committee” 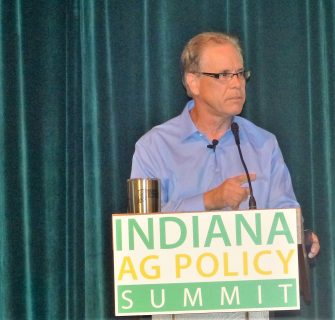 Republican Senate candidate Mike Braun addressed farmers and agribusiness leaders attending the Indiana Ag Policy Summit Monday in Indianapolis. Braun touted his business experience and, in particular, his ties to farming since the late ‘70s. He says he currently manages a lot of farm acres and deals with a lot of farmers on a regular basis.

Braun said that one of his top farm policy priorities, if he were to get elected, would be maintaining crop insurance in the farm bill. He said he feels as though coverage levels are sufficient and the program is good because it pays for itself.

“The other thing would be to enhance markets. To find other things that you can use corn and soybeans for. I think that the creativity that’s been out there among ag markets has been amazing. We do a lot more than just eat it and feed it to animals now.”

Braun also discussed trade and tariffs. He says it needs to come to an end sooner rather than later as the farm community is taking the brunt of the retaliation.

“I trust President Trump. He knows the significance, especially here in Indiana, of the farm community and other places that are feeling the short-term pain. That cannot develop into chronic pain or long-term. And if that doesn’t reverse itself, I would weigh in that some adjustments need to be made. Even though you still want to hold the Chinese accountable for their bad trading practices and other bad behavior.”

Braun also expressed his support for the RFS and allowing year-round sales of E15.