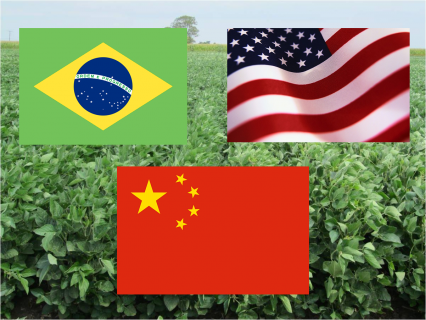 Brazil and China are looking to hold the first high-level political and economic talks they’ve had since 2015. A Reuters article says Brazil’s agricultural trade secretary expects the move will boost farm trade between the two countries. Reuters says the first meeting of the China-Brazil High-Level Coordination and Cooperation Committee is expected during the second half of this year. The meeting will likely move talks forward on permitting more Brazilian meatpackers to export to China. It should also accelerate Chinese approval of genetically modified products.

China is Brazil’s largest trading partner and the top importer of Brazilian soybeans. Brazil exports to China totaled $64.2 billion last year, a 35 percent jump year-over-year, thanks in large part to the trade war between China and the U.S. China recently sent a delegation to Brazil to visit factories that produce beef, poultry, and donkey. The visual inspection is the first step in the process of allowing more Brazilian plants to export to China. Brazil has products that have been waiting two years for Chinese officials to approve them for importing.

U.S. President Donald Trump expressed some optimism on Thursday about potentially reaching a trade deal with China. However, in the same breath, the New York Times says the president may consider leaving some tariffs in place even if the two sides eventually come to a landmark deal. “Without the tariffs, we wouldn’t even be talking,” Trump says in an interview with the Times, conducted after two days of trade talks wrapped up. “And I made that point very clear to them.”

Trump says he plans on meeting with Chinese President Xi Jinping next month, and the U.S. President says China was prepared to make “some significant changes” to Beijing’s economic policies. Some of the changes include better market access for American companies, as well as buying more American products. The president had a letter from President Xi read aloud for reporters, and it included a commitment to buy five million tons of soybeans. That caught administration officials a little off guard. U.S. Trade Representative Robert Lighthizer was more guarded in his tone, saying the two sides haven’t put together the framework of an agreement yet. He did say the main achievement so far was, “that the two sides are still talking. It didn’t come off the rails.”