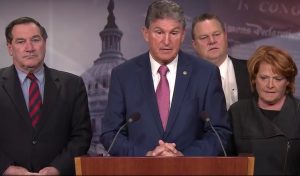 Fifteen moderate Democrats and one Independent say they still can’t support a GOP Senate tax bill in its current form, but are willing to work with Republicans to write a bill more to their liking. Among them are at least three Midwesterners who hail from states President Trump won in last year’s election.

Those three are seen as the most likely to change sides, and one of them is North Dakota’s Heidi Heitkamp, who was asked whether she would oppose the tax bill on final passage.

“It’s unfair to ask that question,” she said. “I’ve been asking all along, what is it? I still don’t know what it is. It’s still a moving target.”

GOP leaders are attempting to make new concessions to get to 50 votes, in which case the Vice-President’s tie-breaking vote would be needed. Indiana’s Joe Donnelly is another Senate Democrat, seen as a possible vote switcher. He is not in a hurry to pass something though.

“If it’s done this week or if it’s done a month from now in a bipartisan way, in a long span of time, aren’t we much better off trying to do something that reflects my state of Indiana and everybody’s state, rather than something they’re just trying to jam through a small hole.”

According to Democrat Claire McCaskill of Missouri, the bill needs work.

“If you’ve got a family farm in Missouri that is going through the feast or famine cycle that you sometimes have in farming, there’s not a lot in this bill for them.”

McCaskill says the bill’s doubling of the estate tax exemption to some $11 million helps few farmers in her state, but she concedes other provisions, including boosting the exemption for equipment expenses could be a plus.

The Senate could take a procedural vote on advancing the GOP bill this week, but a final vote this week is viewed as less likely.