Indiana’s candidates for Governor both met with some of our state’s top farmers and farm leaders to outline their vision for the future of the state and Indiana agriculture. For GOP candidate Eric Holcomb, it was day one of his campaign for governor having just been placed on the ballot on Tuesday by a special Republican committee.   He said  improving Indiana’s infrastructure is one of his top priorities, but was short on details on how this effort will be funded, “We will fix this problem when the General Assembly convenes in January, and I feel everything is on the table when it comes to funding.”

Both men said they support growth of the Indiana livestock sector, renewable fuels, the RFS, and the Indiana Grown program. Both spoke of Indiana’s growing reputation as a place of innovation in life sciences and praised the work of the AgriNovus organization.  In fact, it was hard to find any difference between the two candidates on key agricultural issues.  The most noticeable difference between the candidates was in their style of campaigning. During a meeting with reporters, Holcomb stressed his political experience and work with Governors Pence and Daniels. Gregg downplayed his lengthy political career and stressed his ability to relate to Hoosiers. 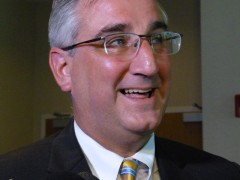 Holcomb said he will be naming a Lt. Governor running mate within the next 10 days and that it will be someone who supports agriculture. He added he is casting a wide net to find just the right person, “I want someone who is willing to work every day to make this state better.”

Gregg stressed his Southern Indiana rural roots and knowledge of agriculture in his pitch to get traditionally republican farmers to vote democratic this year, “I don’t farm for a living, but I live on a farm. I manage my farm and my mother’s farm. I get it. I know what you want, and I challenge you to look beyond those party labels.”

Holcomb stressed that, as Lt. Governor for the past 4 months, he understands agriculture and Hoosier ag groups and, as Governor,  will be a strong spokesman for continued growth, “I will share the importance of agriculture not only to our economy but to our future.” 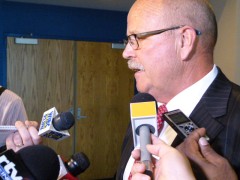 Gregg stressed that his commonsense approach is something that farmers will identify with, “I am the one candidate that comes from a farm background. I will talk about it and be a partner with you.”

The Ag Policy Forum is an annual event presented by the Indiana Corn Growers Association and the Indiana Soybean Alliance. Both men made opening remarks to the 200 farmers and farmer leaders who were in attendance and then participated in a panel discussion with moderator Gerry Dick. The event also featured a presentation by representatives of Indiana Farm Bureau, Indiana Pork, the Agribusiness Council of Indiana, and Indiana Soybean Alliance.  They outlined the top policy priorities for Indiana agriculture.