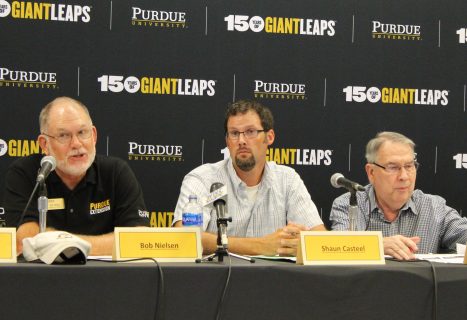 “If you ask me in a given year what month makes or breaks soybeans, traditionally, Grandpa always told me it was August. Well, it’s late August and September for normal planted conditions. This year, a month late, it’s September. That’s what’s going to make or break our soybeans this year.”

Even with these near drought conditions in the state, Casteel still believes there is hope for this crop.

“I normally don’t tell people to turn their irrigators on until we hit R3; that’s first pod. So, we’re just now getting to first pod and full pod growth stages. So, to have this drought condition, it’s not great, but we’re not sold short yet. So, if rains are coming back or the irrigator gets turned back on, we still have a lot of potential.”

The big question that Casteel continues to get is will this crop mature in time? He says that if half the soybean crop will be podding next week as he expects, “That’s probably going to put us at about the first week of October, about half our crop is going to be shedding leaves, roughly.”

Casteel continued, “So, that’s going to be a place that if we get a hard freeze, that half crop, that’s fine. We’re shutting down. We’re just taking a little bit of icing off the cake, a little bit of the sprinkles at that point. Now it depends on the other half of the state, the other half of the crop, how much longer do they have before they finish this physiological maturity, these seed fills.”

Casteel says his best guess is that harvest will begin mid-October and really pick up in late October.

Will this year’s corn crop have enough time to mature? Tomorrow we hear from King Corn, Bob Nielsen, with Purdue Extension.