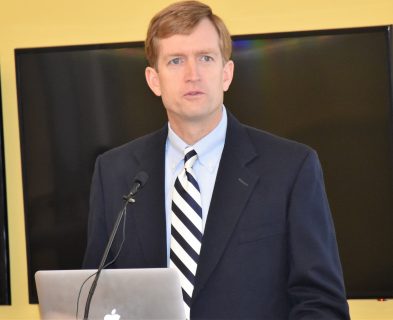 A new report from Purdue’s Indiana Climate Change Impacts Assessment team details changes in Indiana temperature, precipitation, and weather patterns, how that can affect row crop and livestock producers, and how they’ll need to adapt. The report was released Tuesday during an event at the Indiana Corn and Soybean Innovation Center, home to research that will help farmers adapt in future years.

“We see spring and winter getting much wetter going forward, not that it’s going to happen every year, but on average it’s going to be wetter,” said Dr. Jeff Dukes, director of the Purdue Climate Change Research Center. “What that may mean is that people can’t actually get into the fields to take advantage of the warmer spring because it’s just too wet.”

He says water management will be an increasing challenge, and farmers will be faced with hotter summers.

Dukes told HAT there is no political agenda at the research center. Their climate change research is science-based.

“Our center is made up of 90 different faculty members or more across 26 different departments in the university, so people are looking at climate change from a whole bunch of different angles in our center,” he explained. “The point is to better understand how the climates have changed in the past, how they’re going to change in the future, what the impacts might be, and then we want to get that information out to the public so that we can be as useful as possible.” 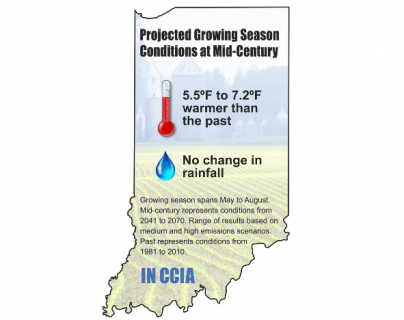 Among the key findings in the study, “more frequent heat stress and a doubling of water deficits are expected to reduce Indiana corn yields, for current varieties, by 16 to 20 percent by mid-century. Soybean yields are expected to decline 9 to 11 percent.”

The report also found that “by mid-century, the annual number of days with high temperatures above 86°F, a critical threshold for livestock heat stress, is projected to double from 40 days per year to 80-100 days per year.”

What can producers do to cope with this change? In our next report, professor of agronomy Laura Bowling, the lead author, shares some ideas.

(Above graphic: Indiana scientists project that annual statewide temperatures will increase by 5 to 6°F by mid-century and 6 to 10°F by late-century, depending on the amount of heat-trapping gases released into the atmosphere by human activities 5. Mid-century temperatures during Indiana’s growing season, defined as the period from May 1 to Aug. 31, are expected to increase by about 6 to 7°F.)