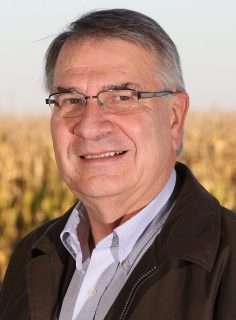 As we head into 2021, we will not have a guiding light that we have had for the past 4 decades. Well-known Purdue Economist Chris Hurt has retired.

“His ability to explain economics in practical terms that related to a farming operation is what made him unique,” states Dr. Jayson Lusk, head of the Purdue Department of Ag Economics. “Economists are often not good communicators, but Chris was the exception.”

“He would speak at over 200 local meetings a year, all over the state. Sometimes he was even known to sleep in his car. He truly was a public servant and felt he had a duty to serve the farm community of Indiana.”

“Chris represents everything that is best about the land-grant mission, dedicating himself to provide economic guidance based on sound research. Throughout our state and the country, Chris Hurt is a trusted voice for agriculture.”

Hurt arrived in Purdue’s agricultural economics department in 1981. During the next four decades, Hurt had impact as he actively analyzed massive changes in the agricultural economy that he shared with farmers in small and large gatherings throughout the country, including testifying at Congressional hearings in the United States Capitol. He studied massive changes in the pork industry in the United States and was invited to China, Japan, South Korea, and Malaysia to address the implications for the global industry. Throughout his career, Hurt published numerous articles including a highly successful one with his longtime colleagues Phil Abbott and the late Wally Tyner of which he is particularly proud. Titled “What’s driving food prices,” the study focused on understanding the economic drivers of the global food crisis at that time.

“Chris would always give you the straight forward perspective, he never held any of his cards back. I think farmers really appreciated that honest perspective.”

“He always had a smile on his face and always could laugh about something. He never let down markets or a bad economy get him down but would offer a perspective that would help you see a solution.”

Hurt served on the editorial board and as editor of the Purdue Ag Economics Report (PAER) for many years. His faculty colleague and former department head Ken Foster described Hurt first reaching out to encourage him to write for PAER when Foster was a new assistant professor. “Chris threw me a life preserver, and, like any lost and drowning soul, I clutched to it for all it was worth,” explained Foster. “Chris has a keen understanding about the importance of audience. It’s a combination of ‘you can’t teach effectively if you don’t know who you are teaching’ and ‘the best people to teach are the ones who are open to being taught at the time.’”

From the time he was a boy running a small egg business, Hurt was attracted to the entrepreneurial spirit of agriculture, something he said was common among farming families.

“Parents encouraged children to be entrepreneurial so that they would develop that internal motivation and drive. They were right because you take a lot more interest in things that are yours and that you have a connection to–you do it for the family, but you also do it for yourself. The life lessons you learn are the foundation for your future. A job isn’t done until it’s done.”

His parents, who were meticulous business people and benefited from the Extension information available to them, definitely influenced his interest.

“I didn’t realize until college that the business side of the enterprise resided in agricultural economics. The light bulb went on at that moment. I liked animals, but what I really enjoyed was business.”

He went from being a B to an A student and was soon offered an opportunity to pursue his master’s degree at Cornell University. Cargill, a major international agriculture and food corporation, recruited him from Cornell to work in Minnesota and Georgia. From day one the company was training him for a higher management position. What he realized over the next few years, however, was that he wanted to start his own business. When his parents discussed selling their farm, Hurt saw this as his opportunity and he and his wife Becky returned to Illinois to start a hog business there.

Hurt does not have any regrets about that decision. Although they ultimately closed the hog business, the Hurts eventually purchased all the Hurt farmland to keep the farm in the family. During the time he and his wife Becky ran their business full time, they were both completing advanced degrees at University of Illinois, 64 miles from their barn in Casey. Hurt also taught agricultural economics at Lakeland Community College while working on his Ph.D. After earning his doctorate, he accepted a position at Purdue, where he felt he would have the opportunity to have a bigger impact.

Not only did he become a household name in Indiana, Chris Hurt became nationally and internationally known as an expert on the ag economy and market trends.