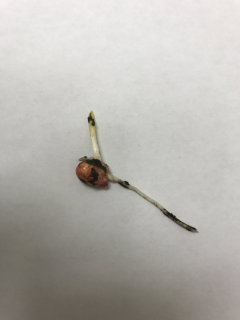 The week starting April 24th saw a great deal of planting progress for both corn and soybeans. In some areas, planters were rolling up until Friday April 28th, when a period of cold, wet weather arrived. Some parts of the Eastern Corn Belt experienced 3 or more inches of rain in a short amount of time with temperatures that dropped into the 40s. Many growers have expressed concern about the viability of their seed after experiencing such adverse conditions.

In his article, Early-Planted Corn & Cold Weather, Purdue’s Bob Nielsen states “One of the risks that newly planted corn faces is that of imbibitional chilling injury due to cold soil temperatures during the initial 24 to 36 hours after seeding when the kernels imbibe water and begin the germination process. If the cell tissues of the kernel are too cold, they become less elastic and may rupture during the swelling process. Symptoms of imbibitional chilling injury include swollen kernels that fail to germinate or arrested growth of the radicle root and/or coleoptile following the start of germination. ” Just like corn, soybean seed is sensitive to injury during the 24 to 36 hour period as well. Understanding this critical period following planting, there is cause for concern, especially for any fields that were planted April 27th and 28th, right before the pattern of cold wet weather started.

• Accumulation of approximately 4.5 inches of rain
• A drop in soil temperatures from 71 degrees F to 54 degrees F
• Temperatures mostly in the 50s and 60s during the day
• Only 64 Growing Degree Days
• Multiple days where we did not accumulate any heat units(GDDS)
• Continually saturated soils

The corn pictured above has experienced severely adverse conditions from the day it was planted, but, it has sent out a radicle root as well as a shoot, is still hard, and is still viable. Current soil temperatures (54 degrees as of Friday May 5th) are still warm enough for both corn and soybeans to germinate and grow. While growers aren’t out of the woods yet, it’s not time to panic. Yes, we desperately need sunny weather and heat, but we still have adequate soil temps and viable seed that is growing. It will be critical to continue to monitor seedling development and assess stands as plants start to emerge to determine how much seed was impacted by the cold, wet weather.