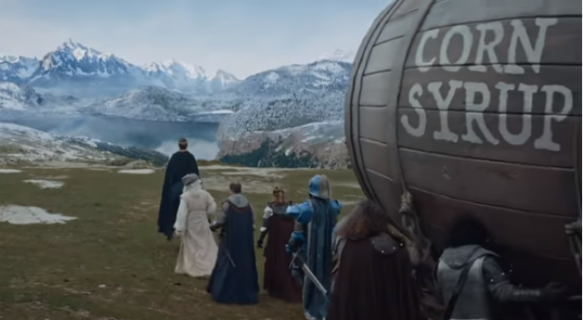 In recent years, the advertisements during the television broadcast of the Super Bowl have generated as much public interest as the game. That is why the price tag for these ads has skyrocketed into the millions of dollars. Big corporations spend an equal amount to make the ads that feature top celebrities, sports figures, and outstanding production. Many are very edgy and designed to create controversy, which only adds to their popularity. This may be why agriculture has been the target of several controversial ads in recent years. This year was no exception.

Budweiser used their Dilly Dilly campaign to slam their rivals and distinguish Bud Light from Miller Lite and Coors Light by  disparaging the use of high fructose corn sweetener, which they do not use and their competitors do. Such a move is necessary since, let’s be honest, there is no distinguishable difference in taste or composition between the three. In a blind taste test between these three beers and horse urine, it is unlikely you could tell the difference.

Yet, by implying corn syrup is bad, the folks at Bud ignited a controversy that has been smoldering for more than two decades. They also ticked off a lot of corn farmers and sparked a social media battle that has lasted long after the game was over. This is, of course, just what the beer maker and their ad agency wanted to do.

Shortly after the ad aired, the National Corn Growers Association tweeted, “Bud Light, America’s corn farmers are disappointed in you. Our office is right down the road! We would love to discuss with you the many benefits of corn! Thanks Miller Light and Coors Lite for supporting our industry.” Next a video was posted of Kevin Ross, vice president of the NCGA’s Corn Board, that showed him pouring four cans of Bud Light into a bathroom sink. Then things really got silly as the barley producers, feeling they somehow had been wronged, started bashing corn growers.

The debate over corn sweetener has been going on for over 20 years with both sides producing study after study to prove their point. To date, there is no credible scientific proof that corn sweetener is any worse for you than sugar. In fact, the only thing we really know for sure is that High fructose corn syrup is nearly identical in composition to table sugar — both contain approximately 50% glucose and 50% fructose. One thing we can say for sure is that consuming too much of either is not good.

Using food fears to market your product is not new. Remember just a few years ago when a Chipotle Super Bowl ad portrayed “factory farms” as farming? You would think we would have learned our lesson by now and not get all upset thus making it  a big deal, or — worse yet — start fighting among ourselves.  Simply stating the facts and pointing out to consumers that these are just cheap, marketing ploys does a much better job of calming things down and reassuring people that agriculture produces safe products.