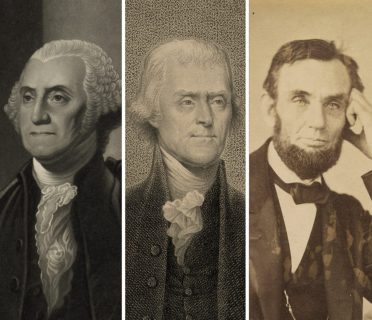 This week we celebrate Presidents’ Day, a day originally set aside to honor our first President George Washington. The federal holiday honoring Washington was originally implemented by an Act of Congress in 1879 for government offices in Washington, D.C. and expanded in 1885 to include all federal offices.  On January 1, 1971, the federal holiday was shifted to the third Monday in February by the Uniform Monday Holiday Act. In 2019 that puts it on February 18. Today this holiday is honoring all our presidents, so George must share his day with such notable misfits as Andrew Johnson,  Chester A. Arthur, Warren G. Harding, William Henry Harrison, and James Buchanan who is often blamed for causing the American Civil War. While historians endlessly argue about the rank of Presidents, almost all the lists put Washington and Lincoln at the top.

While Presidents are typically judged on their accomplishments, their popularity, their historical significance, or their scandals, few are judged on their support for agriculture. In the modern era, we have had very few occupants of the Oval Office who have had any farming experience. Harry Truman was one of the last who owned a farm and worked that farm himself. Jimmy Carter made much of being a peanut farmer, but was also the President who imposed the Russian grain embargo that plunged the U.S. farm economy into a decade long depression. According to Justin Fritscher, with USDA’s Farm Service Agency, Washington, Jefferson, and Lincoln top the list of presidents when it comes to agriculture.

Historian Garry Wills said, “Farming technique was Washington’s principal intellectual discipline, his favorite topic of conversation, the focus of his private correspondence.” When British troops closed in on New York City in 1776, then General George Washington temporarily put aside his battle plans to pen a letter to the steward of Mount Vernon about his farm. Washington studied and implemented ways to improve his farming methods at Mount Vernon, his 8,000-acre homestead and network of farms in Virginia near what would later become Washington, D.C. He took meticulous notes, and he experimented quite often.  Historian Albert Bushnell Hart wrote, “He established what I believe to have been the first agricultural experiment station in American history.”  Washington kept meticulous records on crop rotation, weather, production, and soil health.  Ten years after the republic was born, Washington began to reconfigure fields on his farms, changing from a one-crop tobacco system to a seven-crop system growing wheat, corn, and legumes. Wheat was the principal cash crop; corn fed his livestock; and legumes fed the soil.

Thomas Jefferson gets quoted a lot for his writings about the importance of agriculture, yet his contributions go far beyond that. While certainly a gentleman farmer, Jefferson was an early adopter of cover crops and proponent of soil health and conservation.   While traveling in France, Jefferson saw that farmers planted to the contour of the land rather than in straight lines. He wrote, “Our country is hilly, and we have been in the habit of ploughing in straight rows… and our soil was rapidly running into rivers.” He used contour farming at Monticello, putting him ahead of his contemporaries. America’s fifth president, James Monroe, was also a farmer, who left tobacco for a multi-crop system of grains. Historian Harlow Giles Unger wrote, “To keep his fields fertile, he rotated his crops, setting some fields aside for a season of clover…to revitalize the soil.”

Growing up on farms in Indiana and Illinois, Abraham Lincoln knew how tough farming can be. His desire to provide help for farmers, as well as to advance research and education on farming technology, led him to create the Peoples’ Department, known today as the USDA. After being vetoed by President James Buchanan, the bill that established the Land Grant College System become law during Lincoln’s first term.

So, as we celebrate our long and colorful list of Presidents, let’s give special recognition to our founding farmers, who understood the importance of agriculture to this country, its people, and its economy.