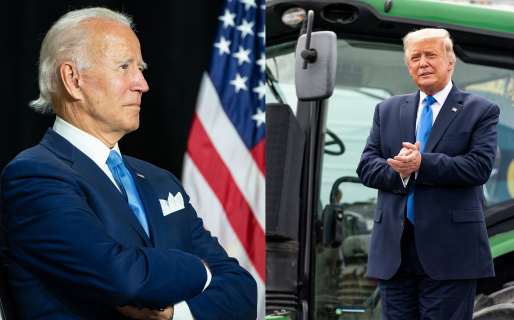 Four years ago, rural voters helped put Donald Trump in the White House. This time around Joe Biden hoped to change that with a strategy that put forth considerable effort to attract rural voters.

Former Agriculture Secretary and Iowa Governor Tom Vilsack led the effort that they hoped would capitalize on the troubles faced by agriculture, including President Trump’s trade war with China which negatively impacted U.S. exports and depressed corn and soybean prices.

Pollsters and pundits had predicted farmers would turn against the president and be receptive to Democratic candidates. That is not what happened. While Mr. Biden has been declared the winner, it was only after urban votes were counted that President Trump’s lead in several key states was eliminated.

Rural voters returned many GOP Senators and Representatives to Washington and, in a few notable cases, defeated Democratic incumbents and elected Republicans.

While some of these races are still in doubt, the divide between rural and urban votes was evident. In Iowa and Missouri, Trump’s support in rural counties generally held up or strengthened. In some states, that delivered him victory.

In others, such as Wisconsin, Michigan, and Pennsylvania, Biden triumphed. The impact this trend may have on issues including agriculture, the environment, trade, immigration, and the economy may be significant.

The biggest impact, however, was seen in House and Senate races. House Ag committee Chairman Collin Peterson was defeated; and Iowa Senator Joni Ernst, an outspoken supporter of the ethanol industry, won convincingly in what had been called a tight race.

Exit polling showed that many farmers and rural voters focused on economic issues rather than pandemic concerns. Many said they appreciated Trump’s get tough attitude with China, despite the impact on ag exports.

Rural and agricultural voters will need to continue to press their case. The changes in Congress will have an impact on the ag issues and policies of 2021 and beyond.

The new leadership on the House and Senate Ag Committees will be the ones writing the next Farm Bill. Climate change and environmental issues were big issues in the campaign and will likely be top drawer issues in the next Farm Bill. New restrictions and conservation mandates will be things to watch. Possible changes at the EPA and FDA would also have an impact on agriculture.

Environmental activists may find a more sympathetic ear at the White House under a new administration.

Vigilance on these issues will be important for agriculture.

China will continue to be the top trade issue, but expect some changes here, too. Look for less emphasis on tariffs and more of a leveraged approach involving potential deals with Taiwan and with other Asian nations.

During the pandemic, the issue of broadband in rural areas gained a lot of support, and it will be vital progress in this area continue.

With both parties realizing the importance of rural votes, it will be important that the rural muscle be used more often than every 4 years. It will also be vital that agriculture build new coalitions.

The “go it alone” approach will no longer work.

On issues including trade, the environment, food safety, energy, and labor, common interests with other sectors and groups need to be pursued to do some of the heavy lifting that will be needed.