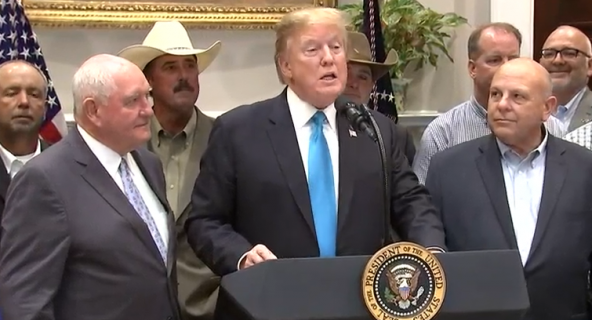 President Trump’s initial reaction to slowed progress in trade negotiations with China was a tweet saying that he was going to buy $15 billion worth of food from farmers and distribute it to poor and starving countries. That was not part of the trade mitigation package announced on Thursday. USDA Secretary Sonny Perdue said of the reason why, “When President Trump learned of the inefficiency and the logistics challenges of the distribution worldwide, as far as the potential market disruption within many of these countries, he understood that to be and really wanted the revenue to go into American producers pockets where the challenge is rather than any other avenues.”

In addition to the $14.5 billion going directly to farmers through the Market Facilitation Program, $1.4 billion will be used in the Food Purchase and Distribution Program. Undersecretary for Marketing and Regulatory Programs Greg Ibach says the program will help clear farmer inventory and serve those hungry here in the US.

“These commodities will be fruits and vegetables, some processed foods, beef, pork, lamb, poultry, and milk. We will work with FNS (Food and Nutrition Service) to distribute the products to food banks, schools, and other outlets that help service low income and hungry individuals.”

An additional $100 million will also go toward the Ag Trade Promotion Program. This will add to the $200 million from last year’s program to help develop new export markets.

With the first payment expected in late July/early August, Perdue says it’s unlikely a deal is agreed upon before then. Payments two and three are contingent on a deal being reached. Can a deal be reached by late fall before the second payment?

“That depends on China. We would love for China to come to the table anytime. We’d made great progress in that regard and when they decided to renege on those commitments and relitigate those commitments that we had, it looked like China was operating in the same way they had operated over a number of years. So, that the remains to be seen but it’s really in China’s court.”