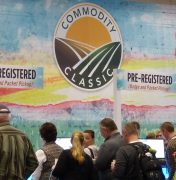 Tuesday marks the start of registration for the 2018 Commodity Classic, GROW BEYOND in Anaheim, California. The farmer-led and focused convention grows every year, so farmers are encouraged to register and make hotel reservations as quickly as they can. Registration and housing opens at 10:00 am Central time Tuesday November 14, 2017.

“All four of those organizations have their main policy sessions, resolution sessions that they establish their policies for the coming year, where they want to see agriculture going and specifically those commodities that they’re representing,” he said. “It’s not only a great opportunity for setting policy but it’s a great opportunity to see the newest innovations in equipment manufacturing. We’ve got all the main equipment manufacturers there. Technology companies will be there with their new, innovative products.”

Among the obvious policy discussions will be the farm bill, tax reform, and trade. 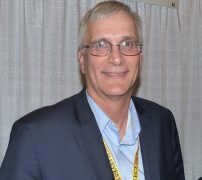 “Hopefully we’ll have a new NAFTA agreement agreed to by the three principals, U.S. Mexico, and Canada, and obviously if any renegotiation happens and we get a new agreement, it’s going to have to be pushed through Congress to get them to approve it,” Moore said. “Our message has always been please do no harm to agriculture when you go into these renegotiations, so we’re hopeful that the administration will kind of back off on some of their rhetoric of ‘if we don’t get this we’re going to pull out and if we don’t get that we’re going to pull out, this is a bad deal.’ Well, it’s not a bad deal for agriculture. It’s been a great deal for agriculture and we want to make sure that anything that gets renegotiated continues to be a great deal for agriculture.”

“There are some things in it that we really like. We’re very supportive of the proposal to keep cash accounting; supportive of the proposal to kind of sunset the inheritance tax; supportive of keeping the step up in basis in place on inherited assets. We’re a little nervous about some of the limits on the deductibility of property taxes. We need to think about that a little bit more. There are some areas of the country that property taxes as expensive as seed purchases for those farmers, so that’s an input that they have to pay to continue to own their land, so it’s a significant portion of their expenses.”

He said there are other concerns with the bill, but overall it is a “good tax bill that reflects most of what we support in ASA policy.”

Farmers can hear each commodity group’s update on the issues February 27 through March 1, 2017 at Commodity Classic. The even also offers an impressive array of educational sessions and speakers, the trade show, and entertainment. Register at https://commodityclassic.com/home.