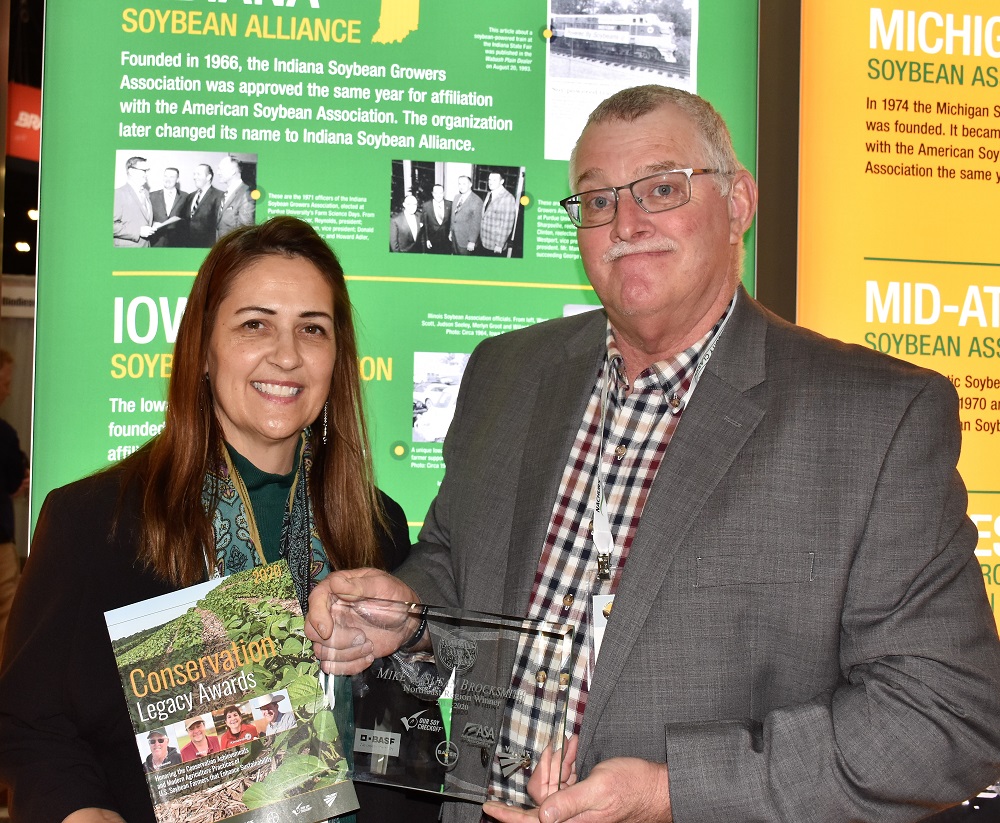 Joining Kavazanjian and two other national finalists were Susan and Mike Brocksmith of Vincennes, Indiana, winners in the Northeast region.

“It’s such an honor and a humbling experience to be recognized for the things we love to do and our passion,” Susan said. Mike agreed they are very humbled and “feel good to be honored for doing something we believe in. We’ve always been strong conservationists and been proud of that fact, and we’ve tried to promote it in our community and throughout the state and nation.”

Mike Brocksmith says they started no till farming in the 70’s because they were busy and thought tilling was wasting too much time.

“We had our first no till corn in 1977 and I tell people it was a failure, but we kept trying,” he told HAT. “We kept increasing our no till acres as time went on. We were a heavy livestock farm so we started no tilling mainly to save time but soon realized there were a lot of other benefits. As time went on and technology got better and equipment got better, it got much easier to farm the way we do today.”

Susan says the number and type of practices they’ve tried over the years have grown and evolved. She believes that is the best plan for those just starting.

“It’s not something people need to just jump into,” she explained. “It is a marathon. It’s not a sprint race that we come in to, and that’s what we’ve seen. It’s really gotten to where we can see the big difference between soils that have been the normal tillage to cover crops and no till and seeing the life in our soils and how resilient they are in times of drought and times of too wet. They are there and they sustain us each and every year.”

The Brocksmith farm is using cover crops on every acre, and non-GMO corn and soybeans on 100 percent no till ground. Learn more by clicking play:Mike-and-Susan-Brocksmith

National winner Kavazanjian and her husband Charles Hammer, a fourth-generation farmer, grow corn, soybeans and wheat. For the past 40 years, they have worked to implement innovative technologies and farming methods that protect their farmland while growing the highest-quality food and feed possible.

Kavazanjian and Hammer are firmly rooted in their motto “Our soil, our strength,” a guiding principal planted at the beginning.

“While the way we work to protect and improve our soils has evolved over the years, our resolve to uphold that motto has never wavered,” explains Kavazanjian. “It’s more important than ever today to realize our soil is what makes really good agriculture.”

Kavazanjian also established a pollinator habitat on the gravel-covered knolls to provide an atmosphere that supports native bees, butterflies, birds and wildlife. She is currently working with a university to pilot and proof a phosphorus-reduction system that could potentially have major benefits for lakes, farms and watersheds across the nation.

Other 2020 Conservation Legacy Award winners are Frank Howey from Monroe, N.C., in the South region, a pioneer who plants narrow-row corn and soybeans to preserve spring moisture and control weeds, and Randy and Nicole Small of Neodesha, Kansas, in the Midwest region, sixth-generation farmers who have been exclusively continuous no-till since 1999.