Crop ratings have declined again as corn and soybeans dropped a percentage point in the combined good to excellent categories both nationally and in Indiana in the newest USDA-NASS report. Over the last seven days in Indiana, rain early in the week continued to impede field work, according to Greg Matli, Indiana State Statistician for the USDA’s National Agricultural Statistics Service. Warm, humid, stormy weather was followed by cooler drier weather at the end of the week. Storms in the central portion of the state brought severe winds that knocked down trees and caused property damage.

The statewide average temperature was 75.1 degrees, 0.1 degrees above normal. Statewide precipitation was 1.76 inches, above average by 0.83 inches. There were 3.5 days available for fieldwork for the week ending July 16, down 0.8 days from the previous week. 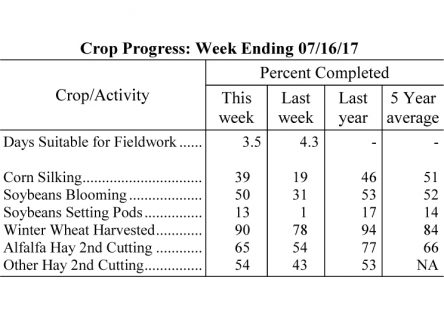 The cooler drier weather in the latter part of the week allowed for herbicide and fungicide applications. Disease concerns rose in the wake of the wet weather. Mint harvest has begun. Cucumber harvest is in full swing. Hayfields and pastures are in good shape and growing with all the rains. Livestock were reported in good condition on average. Other activities included attending county fairs, baling straw and finishing certifying acres at FSA offices.