The nation’s corn crop is rated 57% good to excellent, a 1% drop from a week ago. The soybean crop remained steady at 54% good to excellent. Dry weather continued across much of the Eastern Corn Belt, especially in Indiana. According to Greg Matli, State Statistician for USDA NASS, warm temperatures and little rainfall reduced soil moisture levels further below the five-year average.

The average temperature for the week was 73.3 degrees Fahrenheit, which was normal for Indiana. The amount of  rainfall varied from 0.05 inches to 1.35 inches over the week. The statewide average precipitation was 0.52 inches. There were 6.5 days suitable for fieldwork for the week ending August 4. 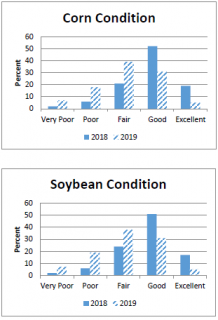 Corn and soybean development progressed last week, though the dry weather resulted in reports of drought stress on lighter soils while irrigation was running where available. Wheat harvest was all but wrapped up last week and mint harvest progressed steadily. Farmers made significant progress with hay cuttings last week, but regrowth was slow due to the dry conditions. Livestock were reported to be enjoying the relatively mild temperatures. Other activities for the week included herbicide and fungicide applications, mowing roadsides, and attending extension meetings.