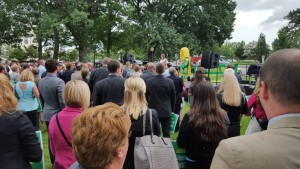 More than 300 corn farmers and ethanol industry leaders joined members of Congress on Capitol Hill today at a rally calling attention to the Renewable Fuel Standard. The Environmental Protection Agency has proposed cutting the RFS for corn ethanol by 3.75 billion gallons through 2016, which represents nearly 1.5 billion bushels in lost corn demand.

“Our message to the EPA is clear and unequivocal: Don’t mess with the RFS,” said NCGA Chairman Martin Barbre, a farmer from Carmi, Illinois. “We are gathered here today because we all understand what’s at stake.”

Following the rally, corn farmers visited their congressional offices to drive home the importance of ethanol and the RFS. In his closing remarks, NCGA President Chip Bowling, a farmer from Newburg, Maryland, urged farmers to stand up and make their voice heard.

“Now is the time for farmers to stand up for your farms, your families, your communities, and our country,” said Bowling. “We must hold Congress to its promises – and hold the EPA to the law.”

“Ethanol supports corn growers’ bottom lines and provides good jobs, promotes economic growth, and reduces greenhouse gas emissions. We need a strong Renewable Fuel Standard to support our producers and the workers this industry employs. In North Dakota, the biofuels industry represents $2.5 billion in annual economic output and almost 9,000 jobs. We need EPA to set strong volumes to give farmers, workers, and the entire industry the certainty they deserve and fight any effort in Congress to undermine the RFS.” -Senator Heidi Heitkamp (D-N.D.)*

(*Note: Senator Heitkamp was unable to speak at the rally due to votes on the Hill. Remarks are from her prepared statement.)

“Illinois farmers export more than a billion bushels of corn annually. That is why I supported them on trade and will continue to support them in the fight for a fair Renewable Fuel Standard.” -Senator Mark Kirk (R-Ill.)

“American investors and consumers at the gas pump are better off supporting American jobs and access to clean, secure American energy, rather than Middle Eastern oil. As a veteran and a Member of the House Armed Services Committee, I see renewable, home-grown fuel as not only critical for our environment and our economy, but also as a national security imperative.” -Representative Tammy Duckworth (D-Ill.)

“Even in Maryland, a state without an ethanol plant, we have seen the tremendous positive impact of a strong Renewable Fuel Standard on our farm, our family, and in our community. It has helped ensure the next generation can come back to the farm. With a strong farm economy, we also have more to invest in our schools, hospitals and roads. I’m here to tell the EPA to stop standing up for Big Oil, and start standing up for me.” -Linda Burrier, farmer, Union Bridge, Md.

“Supporting the Renewable Fuel Standard is personal for me. We value jobs, farm income, and using homegrown, renewable fuels instead of conflict-ridden foreign oil. Agriculture is the backbone of our economy. We should not allow the budding renewable fuels industry to be cut off at its roots.” -Annette Sweeney, Co-Chair of America’s Renewable Future and farmer, Alden, Iowa