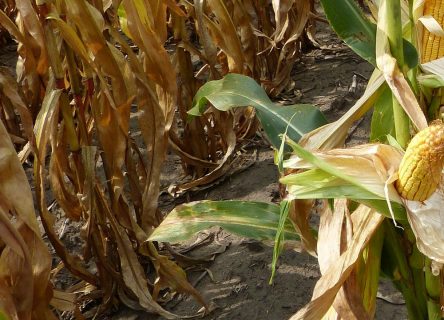 As harvest begins, field reports indicate that corn yields have been declining and stalk quality is a serious concern.  Several weeks of sunny, warm weather has pushed the late planted corn rapidly toward black layer, but stalk integrity has suffered. Lance Shepherd, Pioneer agronomist in NE Indiana, says, “We are seeing a lot of stalk quality issues out there. The ear has had to rob a lot of carbohydrates and sugars from the stalks to finish grain fill. Thus, we are seeing a lot of weak stalks.” Poor root development caused by planting in less than ideal conditions is also a contributing factor.

Shepard says another issue impacting corn standability is disease, “Southern Rust has come up in to northern counties in Indiana, even as far north as Dekalb County. That, combined with Tar Spot and Northern and Gray Leaf Spot, has really taken some of the yield out of these crops.”

As a result, Shepard recommends growers check fields and prioritize where to start harvest, “We are recommending growers get out in their fields and do a pinch test or push test to assess stalk quality.”  Those fields with stalk issues should be harvested first, despite moisture levels.