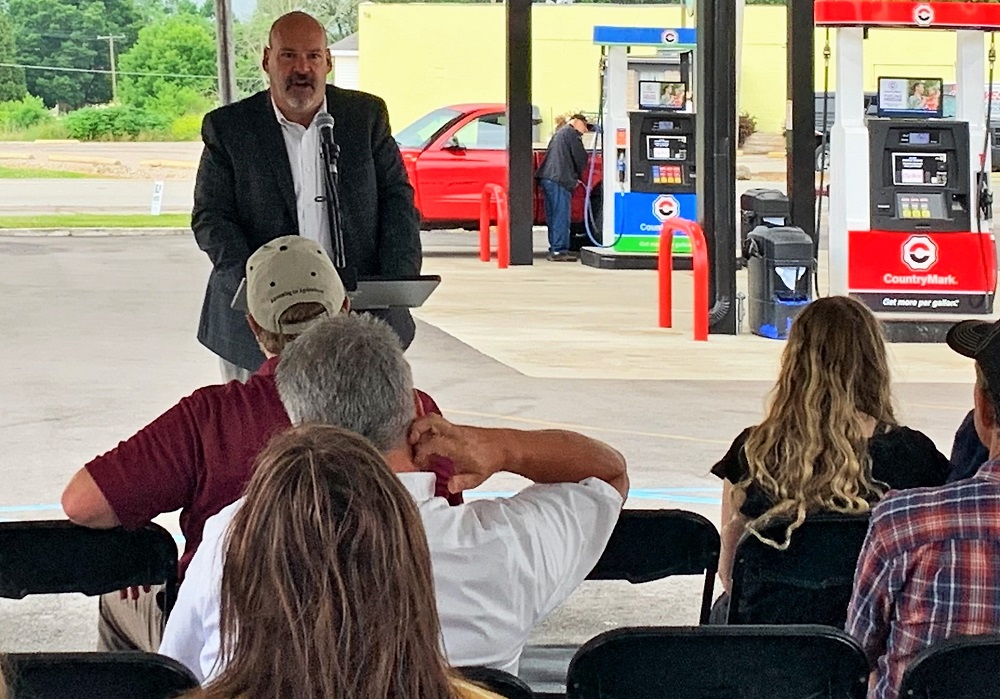 The benefit of higher blends of ethanol took center stage during a grand opening of the newest CountryMark station to carry Unleaded 88, an 88-octane fuel with 15 percent ethanol. AgBest Cooperative and CountryMark hosted the event Friday in Eaton, Indiana, located in Delaware County.

CountryMark CEO Matt Smorch said this is the company’s 6th Unleaded 88 station, and they plan to build on that total.

“We’re going to be working with AgBest in the near future to bring Unleaded 88 to Hartford City right up the road, but at CountryMark we’re trying to push this as much as we can,” he said. “We have over 125 stations in the state, so we’re going to keep going trying to promote Unleaded 88 and get it in more and more of our stations. It will help us. It will help the American farmer, the Indiana farmer and help ethanol.”

Smorch told HAT the benefit of the fuel is higher octane, and that 5 percent higher blend of corn ethanol than regular unleaded.

“And the benefit of that is the increased renewable fuels blending and allowing consumers more choice in what they put into their fuel tank.”

And how much do you know about E15? Kendell Culp, Vice President of Indiana Farm Bureau was at the celebration. He told HAT there is always an opportunity for more education of consumers.

“They see a higher octane and they usually see a lower price for that higher octane, or at least the same, and they don’t really understand why,” he said. “So, we need to do a better job of informing them of ethanol at a higher level, at E15 level is still compatible with most vehicles today. It’s better for the environment because it’s cleaner burning. So I think agriculture as an industry needs to continue to tell that story.”

About 40 percent of Indiana corn production goes into biofuels, a significant market for corn growers, and Culp says that in turn is a significant benefit to rural communities.

After the grand opening event on a rainy Friday, CountryMark held another Fueling Freedom event. For every gallon of fuel pumped on during a 6-hour window, 50 cents benefited local National Guard Family Readiness Groups.