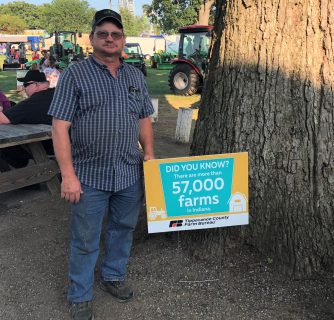 We are less than a week away from the beginning of the Indiana State Fair which means county fair season is coming to a close. Many local groups have been active all summer in promoting agriculture, including Indiana Farm Bureau county offices.

“At that booth we’ve got a trivia wheel and that trivia wheel has got questions on it about the county and state agriculture. The kids get a piece of candy if they get the question right, which nobody ever gets a question wrong, you just guide them through it until they get the question right. We also rented a tractor simulator that we allow the kids in and out of that. We can bale hay, shell corn, or whatever you want to do with it. It kind of gives the kids a feeling of what agriculture is like on the farm.”

Verhey told me why he believes it’s so important to educate the kids especially.

“Labor seems to be an issue on the farm, so if we can educate the kids and get them in here to where they know what’s going on a farm. They know it’s not like it used to be. We’d bale 5,000 bails a year, but we pick them up with an accumulator now. It’s not by hand like we did back then. We’re going to have to have some boots on the ground out in the field. We’ve got a lot of guys getting ag degrees in ag econ and sales, but I see us lacking in the boots on the ground out on the farm at some point.”

This year at the state fair, the Farm Bureau Building features free events, interactive activities and displays, giveaways and farmer testimonials to educate fairgoers about many different areas of agriculture—from farm technology to household products. INFB will again host its annual Taste from Indiana Farms (Aug. 14 – 16) where fairgoers can sample Indiana commodities of all kinds, served by farm families. New this year, INFB is sponsoring Animal Town, a daily interactive exhibit for fairgoers to learn about their favorite farm animals. Lastly, free popcorn is served in the Farm Bureau Building every day from noon to 5 p.m.

Verhey is one of the Featured Farmers at this year’s state fair on August 8.