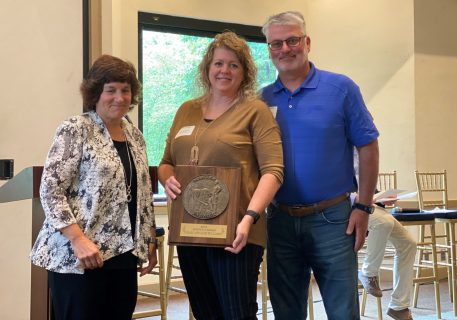 Craig and Kim Williams farm a little over 2,000 acres around Oaktown, Indiana, in northern Knox and southern Sullivan County. They were recently recognized as 2021 Indiana Master Farmers. In addition to the farming operation, the Williams’ run Pro-Ag Seed Service, selling Pioneer Seed.

Kim didn’t grow up on a farm and is an accountant by trade. She keeps the books for both the farm operation and the seed business. She was honored to be named a Master Farmer.

“I’ve loved being a farmwife all these years and just being his sounding board. If he wants to buy something, I run through the numbers because I’m an accountant. So, it’s a good partnership.”

Craig told HAT he was humbled to be named a Master Farmer. He credits his success to other farmers that he’s tried to emulate through the years. He says that’s one of the neat things about being in the seed business.

“I can see a lot of the things that my customers do differently and then kind of pick and choose the ones that I thought would work on my farm. So, I’ve never had to reinvent the wheel. I just have been very blessed to have been surrounded by a lot of other farmers that I can learn from and glean information from and then apply it to my own farm.”

The Williams’ farm is big on sustainable practices. They do no-till and cover crops. Craig says they started doing no-till out of necessity at the beginning, but it’s become a passion.

“I’ve always had kind of an off-farm job ever since we got out of Purdue. So, I didn’t have the time to work the ground three times, or whatever it takes to do a conventional tillage type deal, and then we didn’t have the money to buy the horsepower to do all that either. So, we did no-till out of necessity and we just kind of grew into it and really began to love what we were seeing and how our soils were reacting to that. Then, we added the cover crops a few years ago and it just kind of took it to a whole new level.”

The Master Farmer event is sponsored annually by Indiana Prairie Farmer and the Purdue University College of Agriculture.