The crop production numbers released by USDA on Thursday came as a shock to the market and produced a good deal of head shaking at the Purdue analysis program Thursday afternoon. “The Indiana yield numbers were definitely a surprise, and even the national yield numbers were a bit of a shock,” stated Purdue Ag Economist Chris Hurt.

“It is definitely a shock,” said Shawn Castile, Extension agronomist. He told HAT, given the many replantings of corn and soybeans that took place this spring and some of the disease issues that have hit the crops, the USDA yield figures are hard to understand.  Indiana corn yields were pegged at 173 bpa and soybean yield at 55 bpa 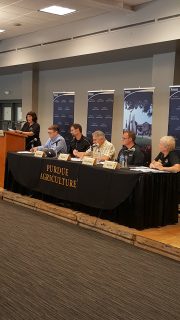 The USDA forecast, if realized, would put the 2017 corn crop as the third largest in history at 14.2 billion bushels. Dr. Hurt said the outlook is for lower prices and another year of very tight margins for producers, “My guess is that USDA would come out with a projected price on soybeans of $9.80, but their price projection is at $9.30.  This means at harvest we could see cash bids below $9 a bushel.”

The USDA did increase some export projections in their demand report, but Hurt says this will not be enough to rally prices very much, “With a nearly 500 million bushel carry out, we are not going to be able to move prices much higher.”  He told the panel discussion only a drastic cut in supply will move prices much higher. Shaking his head Hurt said, “It is just depressing.”

Indiana state officials and commodity group leaders who attended expressed concern over what will be the 4th year of red ink for many Hoosier farming operations. Some expressed concern over what credit conditions will be for the 2018 crop year, especially for younger producers.  Hurt said growers will have to continue to find ways to lower the cost of production, both on input costs and cash rents.

“Frankly, this is not great news for corn farmers. We have seen significant weather issues this year starting with excessive rains that impacted planting and now significant drought hitting several areas including the central and northwest Corn Belt states,” said National Corn Growers Association President Wesley Spurlock. “Despite this smaller crop, the overall corn supply remains large due to last year’s crop. When you combine the drought, current low prices, and little growth in demand, many farmers will feel the economic impact.”

The sharp market selloff after the release of the report was triggered by commodity fund computer trading. Mike Silver, with Kokomo Grain, feels Friday may bring more market stability and perhaps some recovery. Dr. Hurt says it is likely these yield and production numbers may be reduced in future USDA reports.