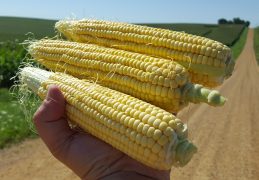 If one thing is proven along the Eastern Leg of the 2017 Farm Journal Midwest Crop Tour, it is that much of the corn and soybean fields from Ohio across to Iowa has been through some sort of stress during the growing season. Variability in population, pollination and ear size is being seen by most scouts making the trek, and it was evident that corn in the Hawkeye State was challenged since planting began.

Usually August brings hot weather to Iowa and helps get the right amount of GDUs, or Growing Degree Units, to the corn. This week, however, highs are in the Mid-70s and the corn is needing some 200 GDUs to finish up.

One thing that the Iowa soybean crop is in need of is rain and the sooner the better.

On Wednesday night, Farm Journal released their data for Illinois. Corn yields came in at 180.72 and soybeans, which are measured by the number of pods in a 3 foot by 3 foot square, were figured to be 1230.77.

Get ready for day number four of the Farm Journal Midwest crop tour will start in Iowa City, Iowa and make our way to Rochester, Minnesota. As far as some of the things we saw yield-wise for the corn throughout Illinois and Iowa yesterday on our route, which went from Bloomington, Illinois up to the northwestern part of the state of Illinois, about an hour west of Chicago, starting in Ogle County in Oregon, Illinois. Corn there came in at 110 and we ranged anywhere from 110 to 172 for Illinois.

We crossed over into Iowa at Savannah over the Mississippi, and our first reading there was 116, but then we ended up getting as high as 203 for the yield checks in the Hawkeye state.

As for the soybeans, of course they’re measured in a 3 x 3′ square and we varied there too but not nearly as much as what the corn varied. We got a reading from 414 on up to 1932 pods in a 3 x 3′ square, but for the most part counts were right around 1100 to 1300 and beans were looking pretty nice here throughout Illinois and Iowa. We wrap up later on this evening in Rochester, Minnesota and that’ll put a bowtie on the 2017 tour.

You can ride right along with the scouts all this week by following the tour online at  www.FarmJournalPro.com. You can also keep track of the progress on twitter with #fjtour17.