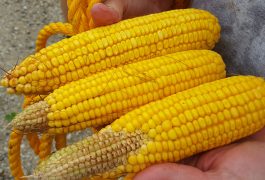 Variation in the corn fields was widespread in Ohio Monday as the Farm Journal Midwest Crop Tour commenced. That same kind of variation in soybean fields was evident as the tour moved through Indiana Monday afternoon and Tuesday morning.

“There was still variability in the corn fields in Indiana,” said Brian Grete, editor of Pro Farmer, “but the yields picked up from what we saw in Ohio and the variability wasn’t nearly as extreme, but it still showed stresses. We saw stresses from early in the growing season when it was too wet and later on in the season when it was too dry in some of these areas. You get out in the fields and they all have some level of stress, and I think that is the biggest takeaway.”

With the tour being conducted in mid-August the thought is that rains, and there was plenty in Indiana Tuesday morning, will help the soybeans. But, Grete thinks some of the corn will also benefit. 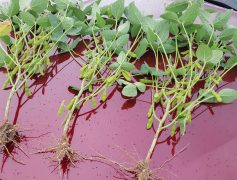 “I think so, but I still think that the beans will benefit more. It did rain pretty hard in some of these areas in western Indiana, and in eastern Illinois farmers told us they had 3-6 inches of rain. So, I think the beans will benefit more than the corn at this point in time, especially the corn that has some stress and is starting that shutdown process a little bit here with the plant.”

Another concern Grete noticed is that “a lot of the lower foliage or stalk has been compromised in some way, shape or form with some stresses there, and that all comes in to play when the plant has to support that ear late in the growing season.”

Grete joined our reporter on the eastern leg of the tour, Ty Higgins. Late Tuesday the final numbers for Indiana were released. Scouts pegged the corn at a yield of 171.23 bushels to the acre and a soybean pod count of 1168.78 in a 3 by 3 foot square.

Day 3 Wednesday moves from Bloomington, IL to Iowa City, Iowa. Ride along with the scouts all this week by following the tour online at https://www.FarmJournalPro.com. You can also keep track of the progress on twitter with #fjtour17.

HAT coverage of the crop tour is sponsored by Seed Consultants, Simple the Best Value in the Seed Industry.