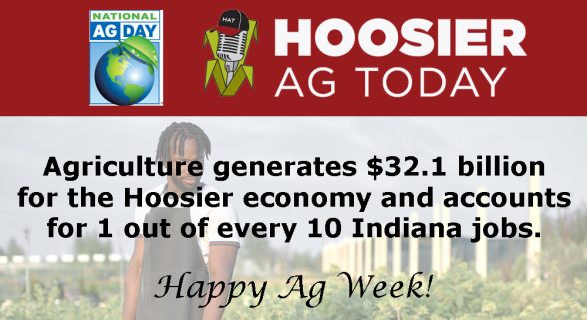 All week long here at Hoosier Ag Today, we’ve been celebrating National Ag Week by highlighting the various ag industries across Indiana that contribute to the state’s economy, because “agriculture is big business in Indiana,” according to Lt. Governor Suzanne Crouch, who also serves as Indiana’s Secretary of Agriculture.

“It contributes over $31 billion to our state’s economy every year,” Crouch continues. “In fact, we’re the 10th largest farming state. We are absolutely in the top five in so many crops and so many products that are produced agriculturally.”

Many of those we’ve highlighted for you throughout the week. Be sure to revisit those at hoosieragtoday.com.

Another tool that shows the economic impact of agriculture was recently released. The sixth annual Feeding the Economy Study breaks down ag’s influence to the local and broader US economy.

Cryan adds that farmers know that agriculture is very important in many different ways, but for those who need more “black and white” convincing about how important it is, “FeedingTheEconomy.com will feed you the numbers for the U.S. and for your state and even for your congressional district… It helps folks understand, as much as we take it for granted, that the food is there when we need it.”