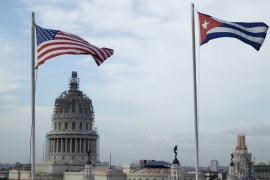 During a speech today in Miami, Florida, President Donald Trump announced plans to roll back an Obama-era detente with Cuba, a move that will tighten export restrictions and create roadblocks in the distribution of goods, complicating agricultural trade with Cuba.  Wesley Spurlock, president of the National Corn Growers Association, in response to today’s announcement, “Cuba should be an easy market for U.S. corn farmers. Instead, that market has gone to our competitors—costing us an estimated $125 million in lost opportunity each year. If trade with Cuba were normalized, it would represent our 11th largest market for corn. Instead, we have just 11 percent market share in a country only 90 miles from our border. At a time when the farm economy is struggling, we ask our leaders in Washington not to close doors on market opportunities for American agriculture.”

American Farm Bureau Federation President Zippy Duvall said in a statement: “We urge the administration to exercise caution in rolling out any new restrictions on doing business with Cuba that would limit our agricultural export opportunities. We should be doing more, not less, to encourage U.S. agricultural exports to Cuba. Our farmers and ranchers and the Cuban people would benefit from increased sales of high-quality, American-grown food and feed. The American Farm Bureau will continue to work with the administration and Congress to maintain and improve the conditions for agricultural trade with Cuba.”

National Farmers Union President Roger Johnson called the timing of the change unfortunate, “At a time when family farmers and ranchers are enduring a steep decline in net farm income, it is disheartening to see President Trump complicate an opportunity to expand U.S. agricultural markets. Today’s decision, unfortunately, sets us in a backward trajectory, moving away from increasing market share in a country of 11 million people just 90 miles away from U.S. shores.

“USGC has worked in Cuba for nearly two decades to help capture grain demand and develop its livestock industry within the confines of U.S. policy. While the announcement today will make our efforts in Cuba more difficult – and almost certainly cost U.S. corn farmers sales in the short term – we have every intention of continuing our work there to build long-term, mutually-beneficial trade,” said U.S. Grains Council President and CEO Tom Sleight. “In the first eight months of this marketing year, Cuba purchased more than 250,000 metric tons (9.8 million bushels) of corn from the United States, about 30 percent of their total demand. This shows both that Cubans want our product when its competitive to other origins and that we have significant room for growth given the right policy environment.”

According to USGC Cuba has historically been a 900,000 metric ton (35.4 million bushel) corn market; based on recent export sales, it would be the 11th largest customer for U.S. farmers.