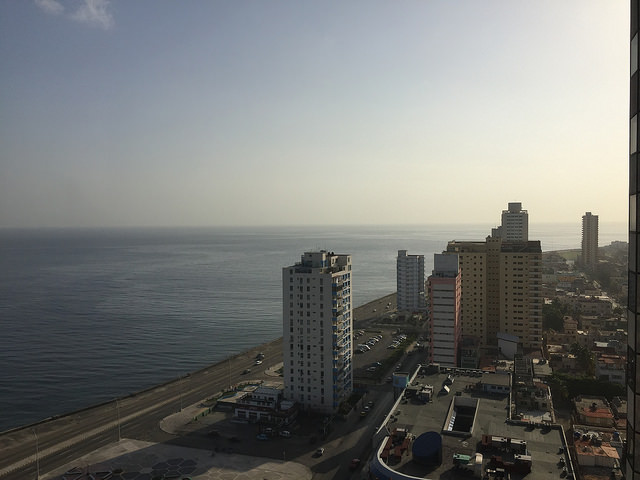 The establishment of diplomatic relations between the US and Cuba, announced by the White House last week, is just one more step toward normalizing relations. This week several US commodity groups visited the island nation to evaluate the potential of trade with Cuba. The US Grains Council and National Corn Growers sent a trade team to Cuba to  determine what commodities might find a market in Cuba. Grains Council Chairman Ron Gray said Cuba represents a market for livestock feed, “The potential is real. Cuba is only 90 miles south of Florida, and the United States has an obvious logistical advantage over South American producers. If the United States was to capture 100 percent of that market today, Cuba would be our 12th largest corn buyer.”
He stated that selling corn to their poultry industry would likely be a good first step. He said the Cuban poultry industry is not the most efficient and the US could offer assistance in improving their poultry production that would increase their imports of corn. With Indiana’s rail system and close proximity to Gulf ports, a Cuban corn market would present a new opportunity for Hoosier corn growers.

Many barriers remain, however, before trade can really begin with Cuba, says Gray, “As everyone who follows this issue knows, that’s a deeply political question here in the United States. The first step will be resumption of diplomatic relations, which is happening as we speak. Congress will also have to act to entirely remove the sanctions. That will take longer, and the US presidential election adds significant complications. When sanctions could be lifted is an open question; what is certain is that the relationship is changing, and we need to be ready when it does.”

But Gray said Brazil also has interest and investment in Cuba and will represent a formidable competitor to the US, “Right now Brazil is winning that market because of the embargo. But the greater opportunity lies in the future. Cuba is a country of 11 million people. It has, in the past, been a hub of economic activity for the region and can be again in the future.” He added that Cuba has just built a new container port outside of Havana. The cost was about $1 billion, and $700 million of that investment came from Brazil.
USGC Vice Chairman Alan Tiemann added that the US has a lot of catching up to do, “Cuba has normal trade relations with most of the rest of the world. The United States has a logistical advantage due to proximity, but if we aren’t willing to compete for a market in our own backyard, the South American producers are happy to step in.”