A Decade of Low Prices and Profitability? 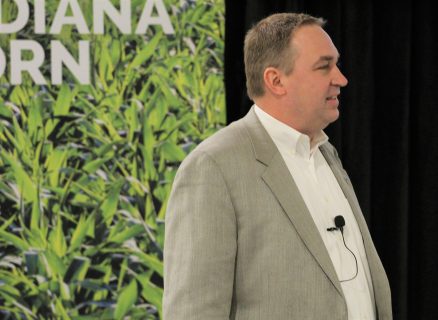 “Profitability in Agriculture’s ‘New Normal’” was the title of Purdue Ag Economist and Director of Extension Dr. Jason Henderson’s presentation at Thursday’s Indiana Ag Policy Forum in Noblesville presented by Indiana Corn and Soy. So, what is the new normal in agriculture?

“I think the new normal is a long period of plateau,” said Henderson. “We’ve had these in the past. It’s just part of the traditional ag cycle. We go up in terms of a boom, we hit a downturn, then we usually get about a decade of a long plateau in terms of profitability.”

That’s not exactly what farmers wanted to hear. But, as Henderson reminded those in the room throughout his presentation with a Mark Twain quote, “History does not repeat itself, but it does rhyme.”

“So, I think we will be in this period of flat, thin profit margins over the next decade until we get that source of new demand. So, we’re always looking at whether it’s who’s the next China, which might be India, or looking at other sources of demand like value added products.”

One of those value-added products that farmers jumped on 2019 (and likely many more will in 2020) was hemp. The jury is still out on the profitability surrounding that crop.

Henderson said another way farmers will look to decrease costs is, “To get larger and spread your fixed costs, which are really big in agriculture, over more acres. So, they consolidate. We’re starting to see that now both in agricultural businesses, but also at the farm scale.”

In addition to consolidation and diversifying, Henderson says many enterprise partners, like spouses, will seek an off-farm job to supplement income and cover healthcare costs, something we’re already seeing across the industry.