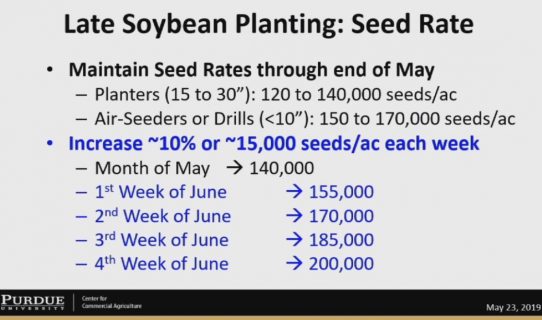 Continuing planting delays in Indiana and much of the Midwest are affecting so many farmers that Purdue agricultural economists and agronomists addressed profitability scenarios and possible shifts of planting decisions during a webinar late last week, asking questions they don’t often need to ponder. Purdue Extension corn specialist Bob Nielsen was asked how he would prioritize which intended corn fields to switch over to soybeans.

“If I had to make that choice, I would probably preserve those fields with the best yield histories, which by definition are the fields with the least stress and the more likelihood of getting good yields,” he said, “and perhaps hoping soybeans can make lemonade out of the lemons.”

“After the month of May, if we don’t get in the field, we’re at 140,000 for about another week and a half, you go every week in June increasing our seeding rates about ten percent, about 15,000 seeds every week,” Casteel said. “We’re trying to put more nodes on an acre basis, because on an individual plant, instead of having 18 or 20 nodes, we’re only going to have 15 or 16, and those nodes are where our pods are being produced. So, we’re just trying to stack the deck on late planting to make up and have more pod production.”

“Our data suggests that optimal populations are no greater than 30,000 seeds per acre, and there is simply no evidence that says we need to change up or down as we get into these very delayed planting situations,” Nielsen explained.