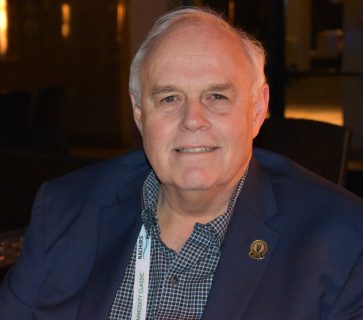 Indiana has a farmer on the Corn Board of the National Corn Growers Association. Dennis Maple from Howard County was elected to a 3-year term Wednesday morning at NCGA’s Corn Congress in Washington, and he begins the term October 1st.

It has been decades since Indiana was represented on the Corn Board and Maple told HAT at Commodity Classic earlier this year after announcing his candidacy, he was ready to serve.

“Indiana needs a voice on the board,” he said. “It’s been a long time since Indiana has had representation on the national corn board, I think it was in the late ‘80’s. I’ve had a lot of people encourage me to run, whether it be state or national board members.”

He reacted by phone after the announcement Wednesday.

“Well it feels really good,” he said. “It’s nice that the corn delegates from the different states had enough confidence in me to elect me, and that felt really nice.”

Maple is a two-term past president of the Indiana Corn Marketing Council and is currently on the council as an at-large director. He is also the current chair of the National Corn Growers Association’s Corn Productivity & Quality Action Team. No doubt that involvement helped with his election effort.

The work for Maple begins now with a couple of priorities for corn growers, especially protecting ethanol markets with the RFS.

“Yes, that’s at the top of the list. Of course, we’re without a CEO right now so that process is underway. I think they’ve got a firm name but not official to lead the charge, so that will be a big item. Today we were in the Longworth Building and sat in on the House Ways and Means committee hearing on the trade tariffs. There were several ag industry folks, farmers and small business farms that were testifying. There was very interesting testimony on how the tariffs are affecting their operations and how they could affect their operations.”

Other new board members are Deb Gangwish of Nebraska and Harold Wolle, Jr. of Minnesota. Current board members Bruce Rohwer of Iowa and Jeff Sandborn of Michigan were re-elected. Gangwish, Maple, Rohwer and Wolle were elected to three-year terms. Sandborn will serve the unexpired one-year term left open by Kevin Ross, NCGA’s first vice president elect for Fiscal Year 2019.

“NCGA had a remarkable slate of candidates for the Corn Board, with many growers who already have an impressive history of service to American agriculture,” NCGA Chairman Wesley Spurlock, who chairs the nominating committee, said. “It encourages me to see such an interest on the part of these growers, particularly at this time when our industry faces so many challenges. I am certain they will be a valuable addition to the board and look forward to see what they do for corn farmers in the years to come.”

The NCGA Corn Board represents the organization on all matters while directing both policy and supervising day-to-day operations. Board members represent the federation of state organizations, supervise the affairs and activities of NCGA in partnership with the chief executive officer and implement NCGA policy established by the Corn Congress. Members also act as spokesmen for the NCGA and enhance the organization’s public standing on all organizational and policy issues.