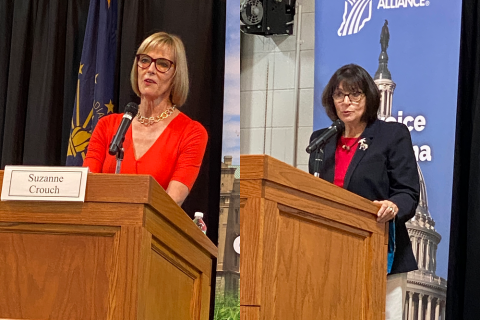 Many issues were discussed during this week’s Lt. Governor debate on agriculture, but there were two vastly different visions for the future of farming in our state from the two major candidates.

With a four year track record of serving agriculture, incumbent Republican Suzanne Crouch was able to point to a number of successes in growing agriculture in our state. She promised more of the same during the next four years but admitted there would be some challenges.

“We are going to be challenged in the upcoming budget session because of declining state revenue due to COVID 19 but that just presents us the opportunity on how we are doing business as a state,” she stated. “How can we roll back regulations to help our agribusinesses and farmers do business with the state in a more efficient and cost effective manner?”

Democratic challenger Linda Lawson, new to agriculture but with a strong passion to help farm families, advocated a change in the way state government funds and works with farmers.

“We need to put our money where our mouth is.”

She added that Indiana provides less money to farmers than any other state in the union.

“We need to treat farmers like we treat big corporations.”

She promised to get more farmers involved in making state ag policy.

Crouch said Indiana agriculture’s best days are ahead of us.

“The future will be bright when every Hoosier is connected with broadband access. That is how we can grow our ag economy the most.”

Lawson said, without additional state funding for farming, growth and prosperity by farm families will not be realized.

Both candidates made their remarks at the Lt. Governor’s agriculture debate on Wednesday at the Boone County Fairgrounds which was livestreamed statewide. The event was organized by the Indiana AgriInstitute.